What Happens When I Give Up Swearing 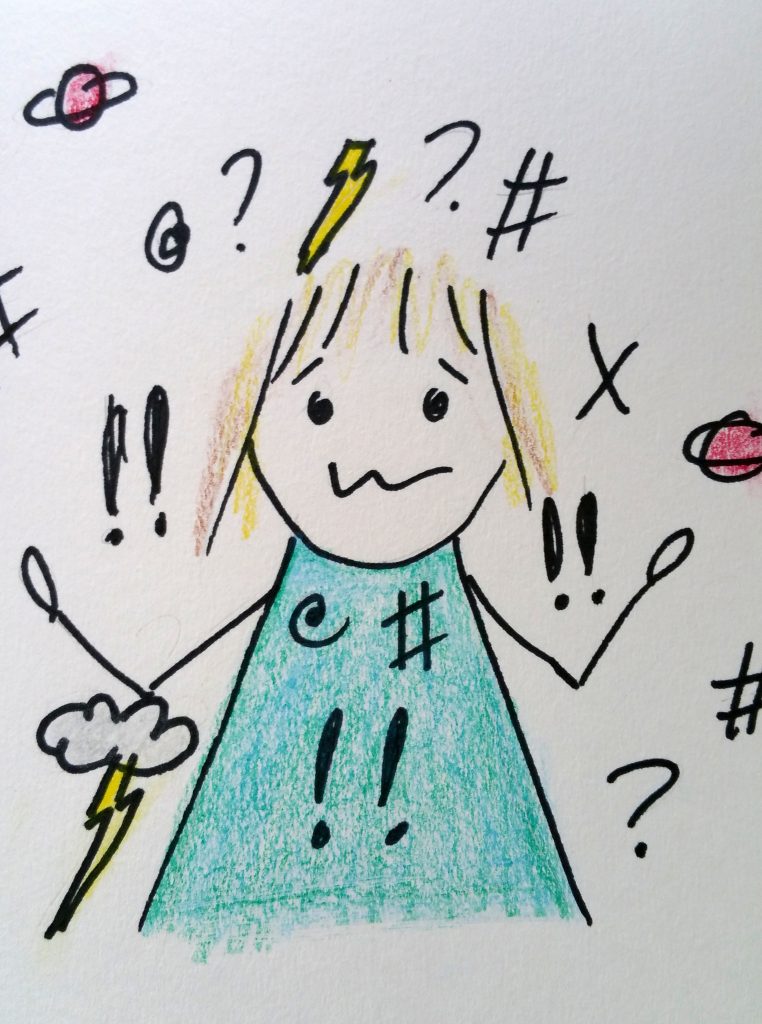 For most of my adult life, I have been a prodigious swearer. I took great delight in peppering my conversation with profanities and letting loose a string of obscenities at the slightest provocation. I enjoyed it. It was fun and I felt like I was getting away with something, probably because my Dad never swore and wouldn’t tolerate us swearing around him. Alan was in awe of my ability to string multiple swears together with random body parts and bits of local vegetation. I lived for the moments I could make him fall over laughing at my more creative efforts.

I really saw no reason to change this behaviour until very recently. I was reading a memoir, Falling for Me: How I Learned French, Hung Curtains, Travelled to Seville and Fell in Love by Anne David. It’s one of those ‘the year I tried X’ memoirs, in this case, following the advice of Helen Gurley Brown’s “Sex and the Single Girl”, which seems to me to be an odd place to get life advice, but I like her writing style so I kept reading.

One of the coolest things about reading is that sometimes an author’s throwaway line, a little aside, something not actually integral to the plot will jump out at you, enlighten you and maybe change your life a little.

I was reading about the travails of a thirty-something single woman in New York when a little bit of text jumped out at me. She was having a conversation with Hugo Cory in which he recommended that she give up complaining, gossiping, cursing and judging people, assuring her that stopping those four things would make her a different person. He went on to explain that cursing is a symbol of frustration. And I thought, really? Even when I’m trying to be funny??

It’s about the energy of what we say. Apparently, spewing forth complaints, gossip, judgements or swears, puts them out into the world around us and that becomes the energy we move through and live in, which, ew. It’s like what happens when you let loose with a big, juicy sneeze without covering up. You become moistly enveloped in a germ-laden cloud of yuck.

So, because everything in my life is in flux anyway, I decided to try an experiment. I’d give it all up for a while and see what happened. I was already on board with the no complaining etc. I took the Dale Carnegie course back in the 80’s (please don’t judge me) and one of their challenges was to never Criticize, Condemn or Complain and while I’ve forgotten, or tried to forget most of the rest of what they taught me, I’ve held on to that (Or at least, I thought I had. By making a conscious effort, I’ve become aware of how often I actually indulge in those.). But the no swearing. That really had me curious.

When you decide to give something up, I think it’s important to remember that if you miss it, if you decide that your life was actually better with that habit in it, you can always reinstate it. Just try it without for a while, as an experiment and see how you feel. Huge declarations don’t work for me. Trying it out for a while suits me much better.

I fully expected to go back to my piratical ways at the end of the experiment, but actually, I probably won’t. Because a surprising thing happened. I became less frustrated. When swearing is not an option, things that used to really bug me pass with hardly a second glance. I am so much more relaxed about everything.

I did not expect this. I expected my frustration levels to stay the same, no matter what words I used to deal with them. But it seems that words have more power than even I had realized.

At the same time I decided to try this little experiment, I started rereading The Four Agreements by don Miguel Ruiz. My therapist had used an excerpt from the Second Agreement as part of my Cognitive Therapy, apologizing that it might be a little ‘woo woo’ (she has no idea what my life is like…) so I ordered it from the library.

In the First Agreement, Be Impeccable with Your Word, he describes words as magic, to be used for good or ill. You can either build someone up with your words or you can tear them down. We’ve all been on the receiving end of both kinds of words and I know which I prefer.

We do the same to ourselves with the words that run through our heads. And most of the time, most of us tear ourselves down, don’t we?

And now I know that the magic works even when there’s no one on the receiving end, when we’re just putting our swears out there because the lid won’t come off the pickle jar as quickly as we would like it to. Putting the swears out there surrounds us with our own frustration and magnifies it. Putting the energy we would have used for swearing into opening the jar gets us pickles.

I’d rather have the pickles.

There’s no moral component to this, just as there’s no moral component to any of the ideas I trot out here. I’m not a better person because of this experiment. I’m just a more relaxed person, a person with quicker access to the pickles. I won’t think less of you if you swear in my presence. I won’t even hand you a tissue. It’s all about the energy. It can either serve you or work against you. And I’ve found that the energy of swearing, even when used in casual conversation, even when I’m trying to be funny, works against me.

I can’t brag that I’ve eradicated swearing (or complaining, judging or gossiping) from my life. It’s an on-going attempt, most recently derailed by a glitch in my internet access. But when I realize I’m falling into old habits, I take a deep breath, re-read the second agreement and try again. It’s a practise, like yoga or gardening.

What do you think? What words are powerful for you? Are there any that you’ve removed from your vocabulary? What was the result? Please leave a comment and let’s have a chat.

7 Responses to What Happens When I Give Up Swearing