Stupid Things I Have Thought

I like to think that I am a fairly intelligent person. I’ve read Ulysses. I know the difference between ‘your’ and ‘you’re’ (and usually manage to correct my mistakes before I hit post). I can do addition without using my fingers.

But I will never be able to be smug about any of this because I have in my lifetime thought some very stupid things. 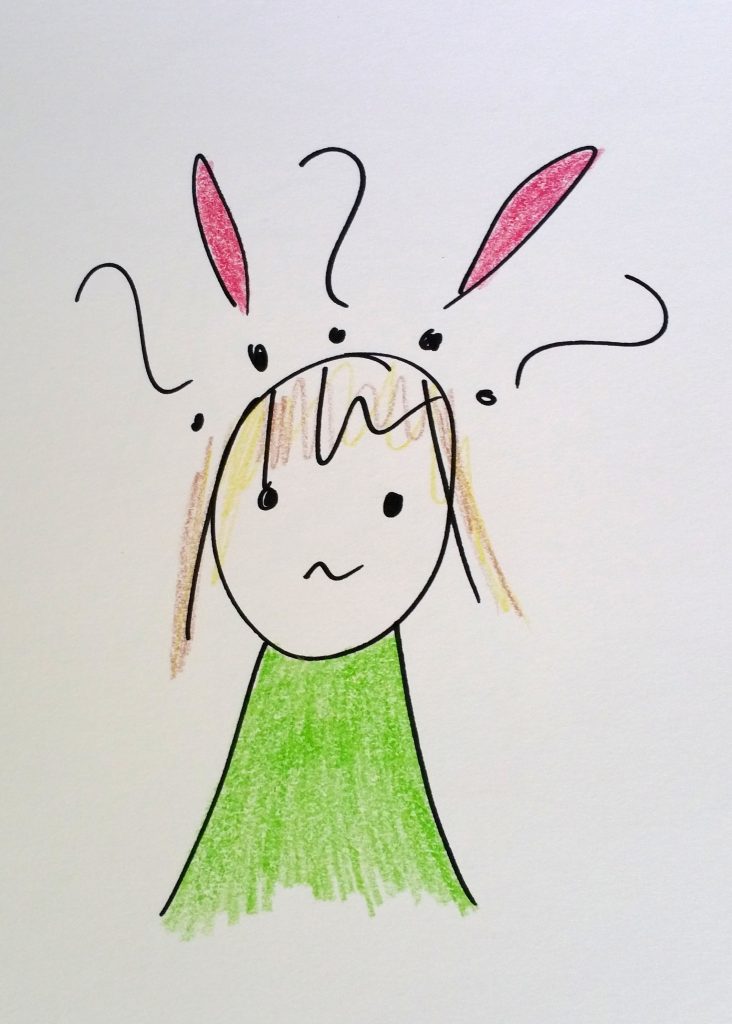 When I was really little, I think I’ve mentioned, one of my favourite places on earth was the local library.

(What am I saying? To this day one of my favourite places on earth is the local library. So integral is it to my life that I use ‘bakery’ and ‘library’ interchangeably in conversation, ‘bakery’ being the source of our livelihood and ‘library’ being the source of much of what makes that livelihood worth living. This, understandably, leads to some confusion in conversation with Alan.)

Our library in Detroit was a pretty cool place. A single-story brick building with low-slung pine and turquoise-upholstered seating. It was the Chaney branch of the Detroit public library system and I was greatly disappointed when I discovered it was named not after Lon Chaney, but Henry (no that’s not the stupid bit, sadly).

I loved perusing the titles and picking up a thick stack of books to take home. I wanted to be a librarian when I grew up, because…

Well, because I thought the librarian got to live at the library. And that at the end of the day, when all the patrons had gone home, she got to do what I loved doing most and walk through the stacks, picking out her evening’s reading to be enjoyed in that room back beyond the circulation desk which I assumed was her home.

I had failed to notice that there was more than one person working in the library at any given time and that the friendly person checking out my books was a different friendly person every time we went in. To my five-year old mind there was one librarian and she lived an enviable life.

This dream came to an abrupt end one day when my mother was helping me get my weekly stash. The librarian was busy checking out my books, so to make conversation, I nodded to the room beyond and said to my mother, with all the confident assurance that can only come to those who haven’t got a clue what they’re talking about, “That’s where she lives.”

“The library lady, she lives in the room back there.”

The librarian had caught the tail end of this exchange and looked at my mother, head tilted.

“She thinks you live here,” Mum explained while I squirmed in embarrassment. I never sought the attention of the exalted and this woman was even more exalted in my mind than the priests.

“Oh dear,” said the library lady. She then assured me, with a huge smile that, no, she had a real home to go to with a family and was able to leave the library at the end of the day and go there.

She thought she was being kind. She had no idea that she was crushing my dream of becoming a live-in library lady when I grew up. I mean, if you can’t live there and have free access to all those wonderful books without interference from the patrons, what’s the point?

If it had ended there, I might have been able to grow up to be grammar snob. Sadly, it did not.

My Dad subscribed to a few magazines: Reader’s Digest and Guideposts among them, both of which I read avidly, like I read anything else that came my way.

Guideposts was a Christian magazine, full of heartwarming stories of how Jesus changed peoples’ lives. And was the source of one particularly electrifying moment of epiphany for me when I was in my early teens.

As I recall, I was sitting in the living room with my parents and maybe another family member or two, all reading quietly. I started into a story about Mount Rushmore, a miracle that had occurred to the writer’s grandfather, one of the people who had carved it.

And the horrifying reality dawned. Up until that moment I had thought that Mount Rushmore? Was one of the Seven Natural Wonders of the world. 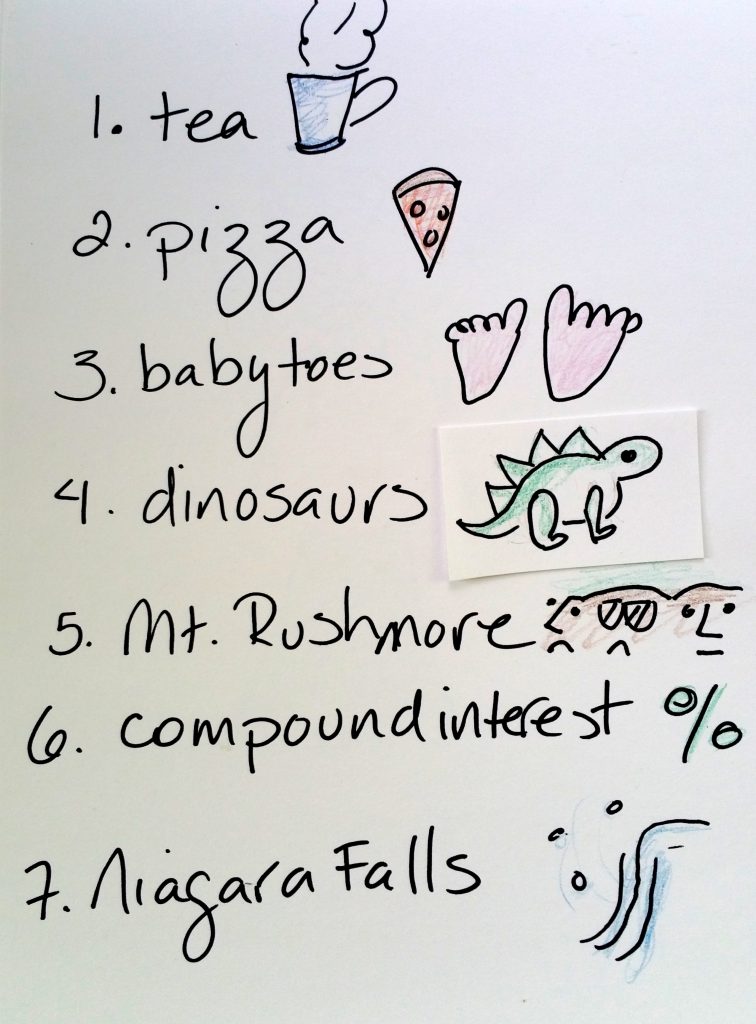 My thoughts were a jumble of outrage, disbelief (I mean, what’s the big deal if it was made? Give people enough jackhammers and they can carve up anything, right? But if it had just appeared there, now that would be something!) and worry that I had given myself away in this crashing ignorance. That kind of stupidity was not dealt with kindly in my family. I looked around the room with a sweaty surreptitiousness, but no one seemed to have noticed anything. My secret was safe. Until now.

The move to that house with the living room suitable for long bouts of communal reading happened when I was nine. We sold the house in Detroit and headed across the border to Windsor.

The run up to the move required multiple trips to Windsor for doctor’s visits and all the bureaucratic processes involved in changing countries. It was a huge deal to a nine-year-old. I knew things were going to be different in Windsor. And somehow, with all of the packing and saying goodbye and filling in forms, I thought that they were going to be a lot more different than they actually were.

It was the end of a very long day that had started before dawn on the box-laden front porch of the house in Detroit and ended with me sleeping on a mattress on the floor of my new bedroom.

As I was drifting off to sleep, I heard my mother talking to my brother Kevin out in the hall, likely trying to find another set of sheets in the chaotic assortment of boxes that were stacked there.

I felt a rush of confusion and dismay. Because I realized that somehow, in all of the preparation for our new life, in the enforced decluttering that came with trying to fit the assorted belongings of a family of, by that time, seven, into a transport truck and the pep talks of how new and wonderful everything would be on the other side of this move, I had picked up the inarticulate thought that, along with a new house, new friends and a new school, I was going to have a new family as well. And here I was in the new house, with the same old family.

The next morning, I had the worst case of constipation I’ve ever had in my life. My mother, hearing sounds of my distress (it was a weird house with a giant exhaust fan in the attic off the bathroom and because that fan was so powerful, the bathroom door was louvred and offered not a bit of auditory privacy at all and one of these days I’ll talk about it all to a therapist) came in and sat on the edge of the tub, holding my hands while I squeaked and struggled and wondered if I was going to die and how ironic would it be to die of constipation on the very first day of my brand new life????

But I didn’t die and when I was done, Mum took me downstairs and gave me a cup of tea.

“She can’t have tea. She’s not old enough,” said Dad. We had rules in our house, one of which was that we weren’t to start drinking tea until we were thirteen. And then it was pretty much required.

“Never mind,” said Mum, “it’s a special occasion.” Leading him to believe that I had started my period. Which must have been very confusing for him when, five years later, she went dancing through the house singing the Hallelujah chorus for that very reason.

And now it’s your turn, if you’re willing. What stupid thoughts have you had? And how did it turn out for you?

3 Responses to Stupid Things I Have Thought