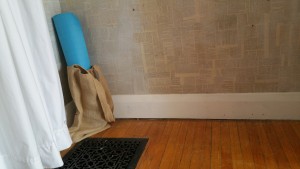 In our time together, Alan and I have moved a lot. Fifteen times in thirty-two years, in fact. This has been a good thing in a lot of ways, especially since we’re fairly lazy people who hate to carry boxes. So every move is a great excuse to get rid of all the crap we don’t need.

We’ve been in our current place for awhile now. Nearly seven years, in fact. And the thing about crap is that without the intervention of a move, it’s easier to leave it where it is. Where is grows and festers.

But we like open, airy spaces, so every year or so, we declutter a bit. And to up the motivation, I take to the internet. Minimalism, people. It’s hot!

But of course, whenever there’s a discussion about anything, there have to be dissenting voices. Questions. Worries. Is Minimalism Sustainable? people wonder.  The irony of this seems lost on those who want to be told to hang on to their stuff and keep gathering more. Because, talk about unsustainable!

It can be a little scary to contemplate life with only what you need right now. But in all my years of getting rid of stuff, I’ve never really missed anything I got rid of.  OK, maybe a few books. But I bought them again second-hand and then eventually let them go a second time and now I never question anything.

Here are a few of the benefits I’ve noticed from this latest round.

I’ve got my wardrobe down to a manageable level. It takes up half of the only closet in our apartment and a couple of drawers. And I find I’m actually wearing more different outfits than I did when I had more clothes.

When I have too many clothes, I can’t be bothered to look through what I have and just grab whatever’s handy and suitable. But now that I can actually see what I’ve got, it all goes into the mix. Not what I would have expected. People have actually complimented me on how stylish and put-together I look, which always makes me giggle because I’ve always felt like I was just barely presentable. Who knew?

Because of the clothes cull, we were able to send an armoire and a chest of drawers to the auction. Our bedroom has so much more breathing room!

And now, when I want to recharge my electronics, the outlet that I use for that is easy to reach. And this has allowed us to stop recharging the cellphones in the kitchen where the tangle of cords was not only a visual annoyance, but an actual hazard when it was time to do the dishes. The dog is much happier now that mummy isn’t swearing so much…

And not having to move big pieces of furniture when I really need to quell the dust bunnies means that the cleaning is easier and more likely to actually get done.

Having been through this process as many times as I have, I’ve learned a few things along the way. One is that it’s way easier to not bring stuff into your house to begin with than it is to get rid of it when the time comes.

I now have whole categories of things I will not buy. CD’s, DVD’s and books for a start. And after our recent adventures with a defunct commercial fridge that I was using as a storage piece (it looked really cool in the last place we lived…) and that we’ve moved more times than I care to count  (Five! Alan tells me. We moved the damned thing five times, which, we both now agree, is about six times too many.) I’ve added no heavy things to the top of the list. In full caps. With exclamation points and underlining. In fact, it’s entirely likely that we’ll just use the furniture we have now until we die because I refuse to go through that again.

This summer, I have all the clothes I need, so I won’t be buying any, except for a pair of flip flops to wear at the outdoor market. Having gotten rid of the armoire and dresser means that I’ll be less likely to want to bring something home, cuz, where would I put it?

There’s a shelf over our kitchen sink that is a crap magnet. It’s empty at the moment, so I’m going to remove it. With no place to put stuff, stuff is less likely to gather.

Another way to keep the stuff from creeping back in to your life is to really take note of how you feel about it as you’re decluttering it. And by that I mean take actual notes of the things you say about it and how it makes you feel. Put them somewhere that you can refer to easily whenever you’re tempted to go on a shopping spree, whenever you think one little something can’t hurt.

I don’t usually recommend allowing yourself to feel bad about yourself for any reason, and when you do, I think it’s a good idea to get those thoughts out of your head as quickly as possible. But this exercise isn’t about beating yourself up, it’s about protecting yourself from the onslaught of stuff and the incredible pressure to bring it in to your life and give it house space. You get to pick where you want to live on the clutter/minimal continuum. And you get to maintain your place there no matter what your neighbours, your family or the gods of commerce think.

The one thing that makes me uncomfortable about the whole decluttering and minimalism movement is the ongoingness of the decluttering. It cannot be good for the environment to have that much stuff flowing through our lives, wearing away bits of us as it goes, no matter how much we comfort ourselves that we are being environmentally responsible by sending it to a second-hand store or selling it online. That stuff all had to be made, which has an environmental impact. Even buying something second-hand has sunk costs. Did we drive there? Did they have the lights on? What could we have been doing instead of shopping?

Isn’t it better to just keep this stuff out of our lives to begin with rather that try to deal with it responsibly once it’s here?

7 Responses to Adventures in Minimalism