The Joy of Feeling Stupid 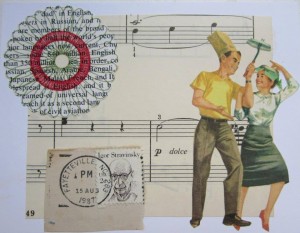 Alan and I took part in a music video the other day. It’s promoting a local indie arts festival. A friend messaged Alan and asked if we would be in it. A chance to make total asses of ourselves in a video that lots and lots of our neighbours are going to see? What’s not to love? It was another (im)perfect moment. We haven’t seen the video yet, but we had fun doing our little part.

I’ve talked about this before. Five years on and a whole lot more practice later and I still stand by my premise. Get used to feeling embarrassed, get OK with feeling stupid and watch the good stuff happen.

I see lots and lots of advice out there about how to live an epic life. And it’s all about facing down your fears and going outside your comfort zone. Which is, actually, good advice. Fear is a rotten bully that just loves a crowd.

But sometimes this advice makes it sound that it’s only by doing the scary, read physically challenging, possibly dangerous things, that we will get to have the life we desire. And, yes, maybe if I did get out there and try skiing just once in my life, my boundaries would be expanded…

But inviting someone who you would like to be a new friend to your house for dinner is almost as scary without the risk of broken bones. And how many times do we avoid that kind of risk because they might not be interested and then you’d feel weird and rejected and embarrassed? Or they might say yes and awhile later invite you back and then twenty years down the road you have this friend who has been with you through so much and you forget that it was ever scary at all.

I volunteered to run the concession counter at a Teen Dance last week. The city runs these things and if local organizations get together ten volunteers, they get to keep the proceeds. It’s a great deal and a fairly easy way to help our local Gallery, so off I went.

And over the course of the evening, most of us who were helping agreed that nothing on earth would entice us to be 13 again. Especially if it meant going to dances. The social awkwardness! The heartbreak! The hope! All of it so painful. I had a birds-eye view and I could see the desperation, as the night wore on. Will I be asked to dance? Should I ask! Tears when he started dancing with someone else. It takes such incredible courage to ask someone.

And it occurred to me that you could put a group of 40 year olds in the same situation and the anguish level and social awkwardness would be exactly the same. But the great thing about being a grown-up is that we don’t have to go to dances. And the networking events we do feel compelled to attend at least serve bad wine, so…

So we insulate ourselves with the idea that social awkwardness and feeling stupid are something that we left behind in our youth. That adulthood is a time for feeling comfortable, or at least avoiding discomfort, which isn’t actually the same thing.

And if avoiding discomfort is what you most want out of life, well, you’re an adult now and no one can force you to make new friends or try new things. No one can force you to nurture those tender little dreams of yours that need a goodly supply of feeling stupid and social awkwardness in order to grow, just as our gardens need  compost and rain.

But aren’t you entitled to your dreams? Isn’t it a shame to let them wither and die for want of just a little bit of embarrassment? A little digging in of what will my friends say?

It isn’t always pretty. It isn’t always fun. And let’s face it, it doesn’t even always work to get out there and take a chance. You could end up crying on the floor of your local community hall while three of your friends stand helplessly by.

Or you could take to the dance floor.