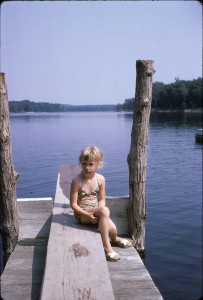 I may have given the impression in the last post that I was the sane and reasonable one in the family. Here’s a little story that will offset that.

One of the huge treats on our way up to the cottage was the lunch stop at A&W. We were a big family and my parents were frugal people. Eating out did not happen often. We looked forward to those little wax-paper-wrapped burgers all damn year!

Except for the one year I took it into my little head to hate A&W and lobby, all the way from Detroit, to NOT stop there.

And before you see this as early evidence of my eventual stance against the fast-food conglomerates or any sign of good taste on my part, I have to tell you that I looooved Happy Soup (tinned soup watered down for children and shilled by Disney characters. I am, in fact, a member of the Happy Soup Club and one of these days I’m going to find that certificate, with my name patiently hand-lettered by my father, and frame it, in lieu of any other kind of degree or diploma.) And when my mother was given a free sample of the newly-introduced Pop Tarts and sent them back to the company, I cried. For days.

So there you have it. All my darkest secrets in one tidy paragraph.

But back to the very long car ride with a very grumpy Barb, still lobbying heavily for not stopping at A&W, just powering our way through to the cottage so that we could sit for an extra hour in the car being smoked at. I recall singing the A&W theme song over and over and over again with my own modifications, in hopes of winning converts to my side. I cannot now nor have I ever been able to sing in tune. It must have been excruciating.

“Look,” said my mother. “We’re stopping for lunch. What are you going to have?” They tried to tempt me with the glories of cheese burgers. French fries. Coke….?

“I’ll have a piece of cheese!”

“Cheese isn’t on the menu.”

My sister tried to change my mind. And so did a few of my brothers, but I was adamant. I had fixated on having a piece of cheese for lunch and I was not to be swayed.

My mother realized that filling me up with unwanted burgers, fries and drinks in the middle of a long car ride would be a recipe for disaster. See, we had a station wagon and I, being the youngest and in posession of the shortest legs by far, always rode in the back seat, from which egress was a slow and labourious process. They hadn’t yet invented the instant flip-down seat.

I can still throw an entire roomful of now grey-haired adults into complete panic by muttering darkly, “I’m not getting enough air back here….” In fact, I like to think that I was the cause of at least a few of those grey hairs.

Given all of that, when my parents pulled up to order, my Mum leaned across my Dad to ask if such a thing was possible (“I’m not ordering a bloody piece of cheese!” my father had said as they pulled off the highway.).

“Of course!” said the perky high-schooler behind the microphone. “Just, um…. give me a minute.”

So there we were, on picnic benches under the trees, my resolve beginning to waver as the smell of burgers and fries and those greasy, greasy onion rings hit my senses. Then not one, but two girls in A&W uniforms appeared bearing my slice of cheese, still hermetically wrapped in plastic.

I had won! And not only had I won, but the girls cooed over me and were so very, very nice to me, and one of them even gave me a hug! As I reminded everyone in the car all the rest of the way to the cottage.

4 Responses to Travels with Barb