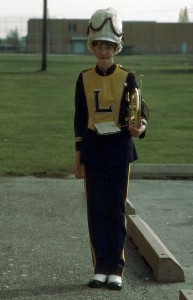 One of the cool things that I get to do these days is help the Stage Manager at our local symphony concerts.

When I started, I had no skills whatsoever, but I’ve learned to open and close the stage door for the conductor without catching his heel in it. I’ve used walkie-talkies, turned down the house lights (oh! the power!) and during one glorious performance, I got to stand on a pew behind the horn section and wave the Union Jack while the orchestra played Land of Hope and Glory.

Because of this, some people mistakenly assume that I’m a musician. And, being an honest sort, I have to tell them no.

I did take piano lessons when I was little. But only for a year, because then we moved from Detroit to Windsor and the one dollar that our beloved Miss Huntreiser was charging for a one hour lesson became five dollars for a half hour and there was no way my mother was going to pay that!

Miss Huntreiser was great. She seemed ancient to me and lived in a house full of antiques that she still used on a daily basis. She taught me how to read music, which I believe is an important skill to have. One of those skills that helps you get through life in a socially graceful way while at the same time strengthening your brain.

She sang along while we played for her, counting out the notes. “One a-yand. Two a-yand!” And, in a fit of optimism not tied to reality in any way, she taught me to always (ALWAYS) approach the piano stool from the right so that when I was seated on the concert stage my skirt would flair out pretty. It’s only very recently that I’ve been able to sit in a chair from the left without feeling extremely uncomfortable.

I never gave a performance. I may have possessed a technical skill, but I had no soul.

Plus I never practised.

The rule was, a half hour a day, before I was allowed out to play and ohmygod you would not believe the contortions I went through to get out of that half hour. I’d finally end up sitting on the piano bench staring at the keyboard, steeling myself to just hit the damn keys and get it over with. By the time I finally got out to play, all my friends were home having dinner.

“You were a very solitary child,” my mother said years later.

Then in grade 7 we got to sign up for the band!

I really wanted to be a percussionist, but girls weren’t allowed. Something about our ovaries interfering with our sense of rhythm. Or maybe they were worried that the noise from the bass drum would interfere with our eventual ability to procreate. I don’t know. I’ve never been able to follow the logic of misogyny.

My second choice was french horn, which we were allowed to play, but everyone looked at you funny because why don’t you want to play the flute like a real girl???

I did, occasionally, practise that one, especially after I joined the marching band.

Now, the french horn is a beautiful instrument, when it’s allowed to shine. But for whatever reason, the arrangements our conductor chose relegated us to a sad form of percussion.

“Can’t you put a sock in that thing?” my mother would ask.

“The kid has to practise!” my Dad would say, grabbing his cigarettes, beer and a book and heading for the backyard. In March.

Eventually I lost interest in the french horn and the marching band.

There was a brief stint where I played the flute in church on Sunday, but my heart wasn’t really in it.

More recently, I bought a set of rhythm bones from a friend. He even gave me a lesson. They sound really cool when played well and are way more portable than a french horn. Or a bass drum.

They also make the dog squint when I try to practise. Plus I feel like a twit because I’m not very good. So mostly they keep my knitting needles company.

Some things don’t really change, no matter how much more mature you tell yourself you’ve become.