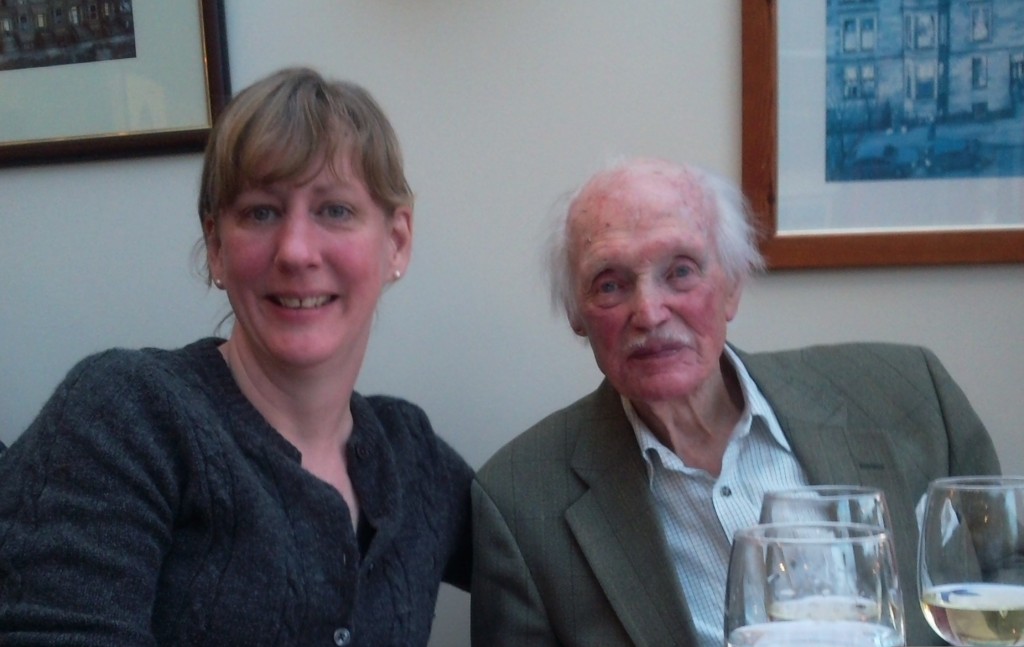 I met Leslie nearly eight years ago,  just after my father died.  Making new friends was not on my agenda just then.  Little did I know.

He and his wife Pat were in Canada for their annual visit from their home in Edinburgh.  He was 93.  That first meeting and the rest of the year were a bit of a blur for me.  But when my friend Fiona announced that they were coming back the following year, we made plans to host a dinner.  And attend a party.  And go out for dinner.  Those two knew how to pack a lot in to a short time.

We got to know each other and something sparked.

It wasn’t just his intelligence, though that was phenominal.  Fluent in multiple languages, he had read, quite literally, all the classics.  He’d also memorized The Rubáiyát of Omar Khayyám, which he would recite over a glass of sherry, with a wicked twinkle in his eye.

He was open-minded and open-hearted.  Accepting of bad language and ungainly questions.  He lost his father in World War 1.  In World War 2, he lead an ambulance team in the east end of London.  After the war, he decided that if this peace were going to last, “we need to make friends with these people” and took himself hitch-hiking through Germany.

When he and his second wife, Pat were on their honeymoon, they travelled through Europe,  stopping to visit some of the friends he had made all those years ago.  As they were getting out of the car at one house, he said, “I should probably tell you, Hans was an SS Officer during the war…”  Pat wanted to get back in the car, but good manners forced her up the drive and in the door to meet a man that in other circumstances she would have dismissed as inhuman, not worthy of compassion or understanding.  He knew how to challenge people, did Leslie.

He founded the Green Party of Scotland and during last year’s election, went door to door campaigning for the local candidate.  He never lost his engagement with life, his concern for the fate of the world or his ability to make friends.

I never expected to fall in love, happily married and middle-aged.  But I did.  Knowing Leslie enriched my life, opened my mind and my heart , made me realize that there will always be surprises.

Leslie died Sunday, at the age of 100.  My world feels smaller and duller because he’s gone.  This weekend we’ll be toasting him and his wife.  And a toast for you, too.

May love find you when you least expect it.