This is Earl, the elder statesman of our little plant family. Earl was given to us when we opened the bakery seven years ago. 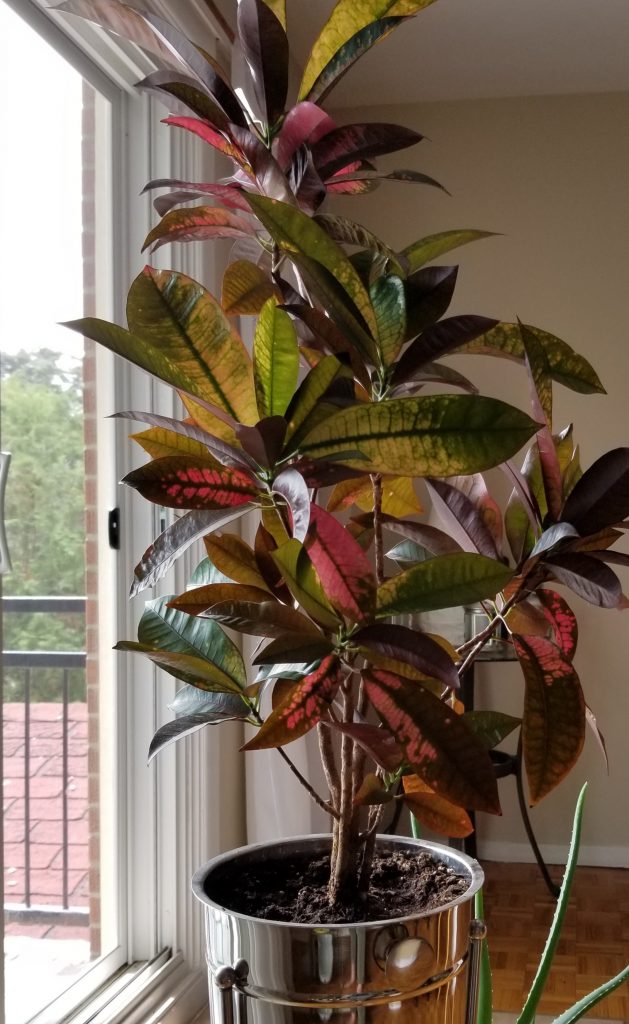 Crotons are rumoured to be fussy plants, difficult to keep alive, but Earl is an easy-going sort. He survived several weeks at the bakery before we realized that all that flour would clog up his leaves. Then he moved to my Reiki studio, which went well for awhile, but during a long stretch of downtime, I forgot to water him. When I found him, all his leaves were drooping. I cried and begged him not to die as I topped up his water supply. And a few hours later, he was back to his usual, exuberant self.

He weathered last year’s move well. And grew happily in his new, south-facing window (crotons love lots of light). Grew so happily, in fact, that he outgrew the pot he was living in.

I was nervous about transplanting him. He was in a strange (to me) water set-up that I knew I couldn’t maintain. I had read that moving a plant from water to soil doesn’t always go well, but I wanted to give it a go. His roots were inextricably entangled in the lava stone that he grew in. In the end, I added a goodly layer of drainage to the bottom of his new planter (yes, it’s a wine cooler – it suits his personality) and filled in with potting soil and crossed my fingers that he would survive. 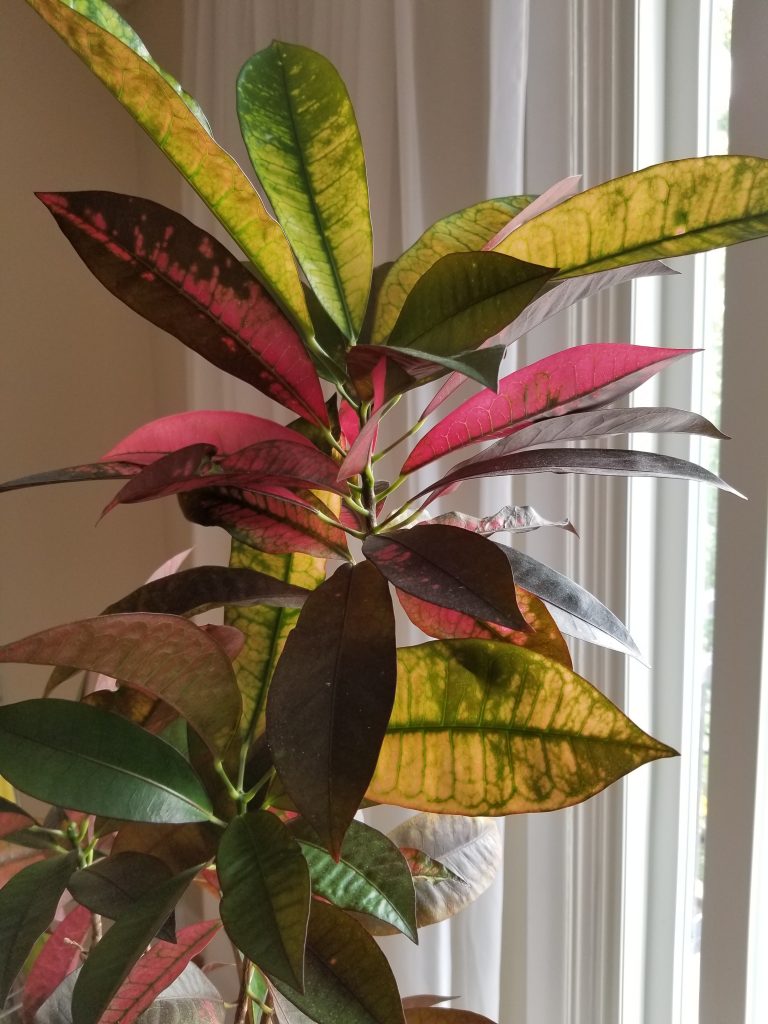 And he did! Throwing out so much new growth that it was crowding the old. So I pruned a little piece off, removed the lower leaves and popped it into a crystal sherry glass with some filtered water. It seemed the most appropriate propagation station for Earl’s baby. And for the last few months, I’ve been topping up the water and wondering if it was going to work.

It’s been a tough week round here. A heat-wave making the bakery a hot and uncomfortable place to work in. I’m transitioning away from my duties there and trying not to feel like a failure because of it. I’m not able to do all the things that Alan and the team need me to do and trying to do any of it knocks me out for the rest of the week. So we’ve hired Marie-Ève. She’s young, strong and eager to learn. It’s all good, except in my own head. Part of that is because, along with the heat wave, we’ve had day after day of thunderstorms and that kind of weather causes my arthritis to flare up, so I’ve not been able to truly settle in to my new life yet. As I try to do something and all my joints tell me to just lie down and be quiet, I think that, while I am getting better, I’m not all better yet and maybe I never will be and that is not a good thought to carry around with you. Plus, I went for my first-ever pedicure this week. Precipitated, not from a desire to be spoiled but because I can’t actually reach my feet without causing great pain. Toenail trims have been ending in tears lately, and not because of my phobia.

“Do I have to have polish at the end?” I asked the lovely woman looking after me, with the same expression I used to have when asking my mother if I needed to eat all  the lima beans.

She assured me that polish was not a requirement and set to work on my poor, neglected feet. And I tried to lose the notion that I was somehow being punished.

“Is the dryness part of your condition?” she asked at one point.

“Well, sort of…” since I can’t reach my feet for anything other than basic maintenance, the moisturizing  just isn’t  happening.

An hour and a half later, she’d knocked ten years off my toes and I wafted out on a frankincense-scented cloud. Next time I might even enjoy it a little. 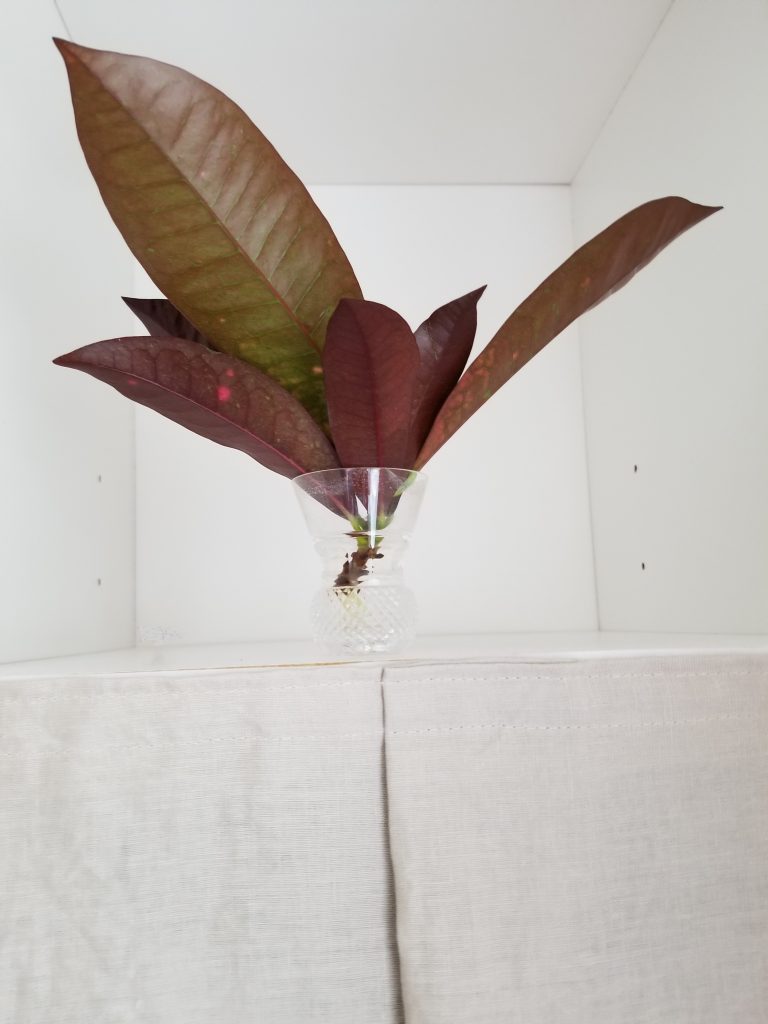 The other day, as I was reaching into the bathroom cabinet for a painkiller, a little flash of white caught my eye. I took a closer look, taking the sherry glass down from the shelf. Earl Jr has put out roots! I topped up his water, praised him lavishly and put his glass back on the shelf.

Hope is there, out of the corner of your eye. Life carries on, no matter what. Miracles abound.

This entry was posted in Musings and tagged Be Not Afraid. Bookmark the permalink.

6 Responses to Earl, Harbinger of Hope