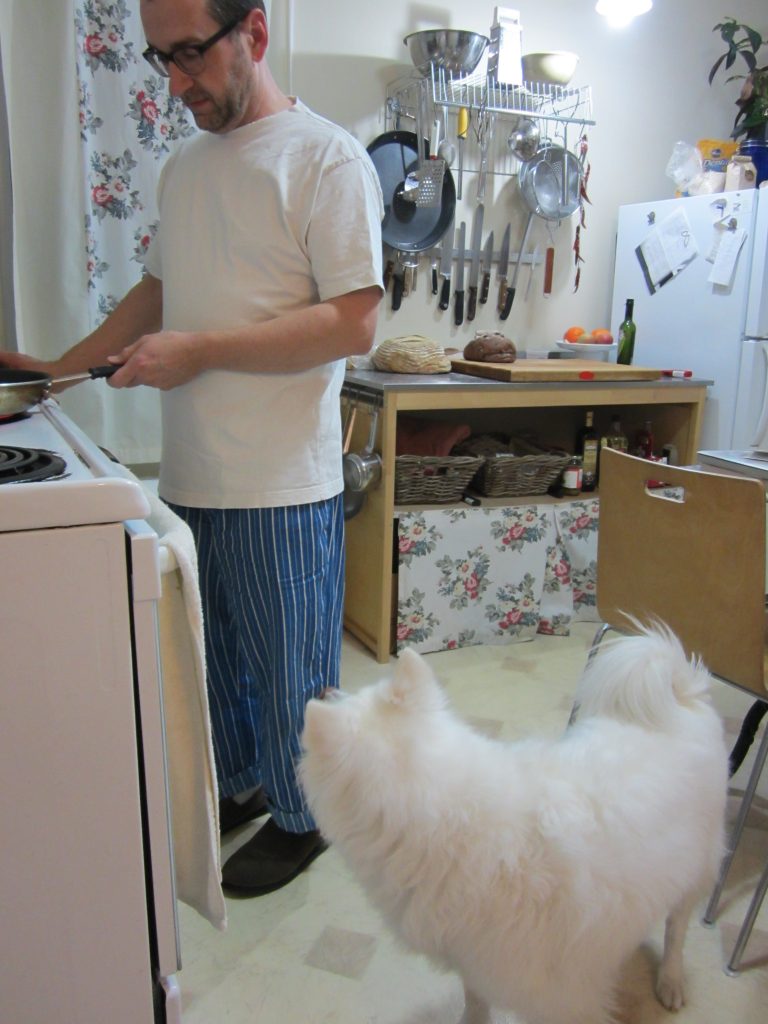 Ruffles wandered into our life nearly six years ago. He was already eleven at the time, so we didn’t think we were in for a long-term commitment.

The day we brought him home, I picked everything up off the floor, in case he was a chewer. That was never a problem, except for one summer when he got into the habit of licking the insides of all my shoes, which was kind of disgusting. He also never rolled in anything, which allowed us to forgive him nearly everything else.

Ten days after we brought him home, we left for a trip to Paris. He stayed with our friend Maxine and I felt very relieved that he was in the hands of someone who had had dogs before and actually knew what she was doing.

While he was there, he stole her toast and humped her daughter’s leg so frequently and enthusiastically that he earned himself the nickname in the title.

Once back from our trip, we settled in to figuring out how to live with this new, mysterious being who had a past we didn’t know about and as many quirks and issues as we did. He barked ferociously at anyone who came into the house. This was a problem since we live in a triplex and there were people coming and going at all hours. I hate the sound of dogs barking. I was starting not to like Ruffles when we called in the trainer.

“How trained do you want him to be?” he asked at the first meeting.

So we trained him not to bark and he relaxed into our household.

We trained him not to bark, but we never trained him not to beg. Dinner time would find him parked on the floor between us, whimpering at each forkful that went into our mouths. And yes, we did feed him bits from the table. We’re terrible disciplinarians. In our defense, we thought it would only be a couple of years.

He was a complete hooligan around food.

During an early dinner party, the one that taught us to corral him in the bedroom until the main course hit the table, he wandered into the living room, charmed the assembled and in the blink of an eye grabbed all of the sliced salami off the coffee table.

Then I went into the dining room to make sure everything was ready. The plate of bread looked odd. Asymmetrical. And stingy. Puzzled, I took it into the kitchen to show Alan.

We looked down at Ruffles. We had been working to help him lose weight and it had been going well. Which made it even easier to see the distinct bulge in his belly caused by half a loaf of bread.

Thinking that he was now well and truly sated, we didn’t bother to lock him up when it came time to plate the main course: venison chops. And as I was carrying one from the cutting board where Alan was carving to the plate on the other counter, Ruffles launched himself joyfully into the air and sank his teeth into it. Remembering the advice to use a firm “NO” to discourage bad behaviour, I tried. What came out was a pathetic, high-pitched bleat. “Noooooo!!…..”

The dining room went silent. “There goes dinner,” one of the guests muttered, offering more wine all around.

Thankfully we had extra venison. We set the chop with the teeth marks aside and continued with the meal.

After that, we’d corral him in the bedroom with an old door barring the entry. We’d throw in treats and his water bowl and a couple of books. And he would whine and fret until we finally let him out to charm another round of guests. “You don’t have to lock him up for ME,” they all said.

“Trust me,” I would mutter darkly, looking at his shining innocence. “I really do.”

He stole food whenever he could, viewed the sidewalk as his own personal smorgasbord. He once bit the dog walker we hired to look after him when we were away at an out-of-town market. And a friend we’d had round for dinner. And both of us a few times. He barked at every other dog he saw. He snored.

He spun in happy circles every time Alan came in the door. He never learned to play fetch. Toys of all sorts bored him. But he loved to help with the cooking, tasting whatever ingredients we threw his way. He liked to sniff my library books when I brought them home. And occasionally, he would give one an experimental lick.

Ruffles started having some health issues earlier this year. The vet was good. Agreed with our decision to treat him for as long as we could keep his quality of life good. When he started going off his food, fear moved in.

Last Wednesday was an epically good day. We had a visit from my sister in the morning. And a visit from his very special friend Bo in the evening. Honestly, he was so in love with Bo that we couldn’t even say her name in front of him or he’d go tearing around the house hoping to find her.

I had sent her a message letting her know that he was failing and she might want to come see him one more time. And then I felt like an alarmist because he had rallied so well. He looked to be with us a good while longer.

When I got home from work on Thursday, he was too lethargic to get up and greet me. But that was expected after such a busy day.

An hour later, he came to find me, hunched and trembling.

We got him to the vet and the hard decision was made.

Our home is quiet now and dinner is not nearly as much fun.