My Mother died early one morning. Her family had kept vigil at her bedside for five days. The end was beautiful and peaceful, not least because we knew that’s what she wanted. Alan and I were with her.

After we said our good-byes, signed a bunch of forms and phoned various family members, we headed back into the city to regroup and maybe have some breakfast. On the way in, Alan’s cell-phone rang. I answered.

“HI!” said a booming voice. “THIS IS BOB FROM THE FUNERAL HOME. WE JUST PICKED UP YOUR MOTHER!” A very slight pause and then he said, “YOU KNOW SHE’S DEAD, RIGHT?”

“OH, GOOD!” he shouted. “BECAUSE SOMETIMES I HAVE TO BE THE ONE TO TELL THE FAMILY!”

Well, geez, dude, I thought. You really kinda suck at it.

“AAAAAANYWAY!” he continued, “WHAT ARE YOU UP TO NOW?”

I explained our plans and that we would be available to meet with him in a few hours.

As I ended the call, I looked over at Alan. “That man is waaaaay too peppy,” I told him.

A few hours later, we were met at the door of the funeral home by the lovely woman who had taken care of my Dad’s funeral a few years before and who my mother had been hoping would look after hers. It was not to be, however, as she was literally heading out on her maternity leave. She had seen the name and waited to greet us and offer her condolences. “I’m sorry I can’t stay,” said, indicating the obvious, “But, um, Bob will, um, look after you.”

Bob was a large man, who looked like he would be more comfortable on a football field than anywhere requiring a suit and quiet.

We sat down in his office to plan the last details, my parents having taken care of the bulk of the planning years before.

I handed over the photo I wanted to use on her funeral card. My father had taken it in the late fifties or early sixties. 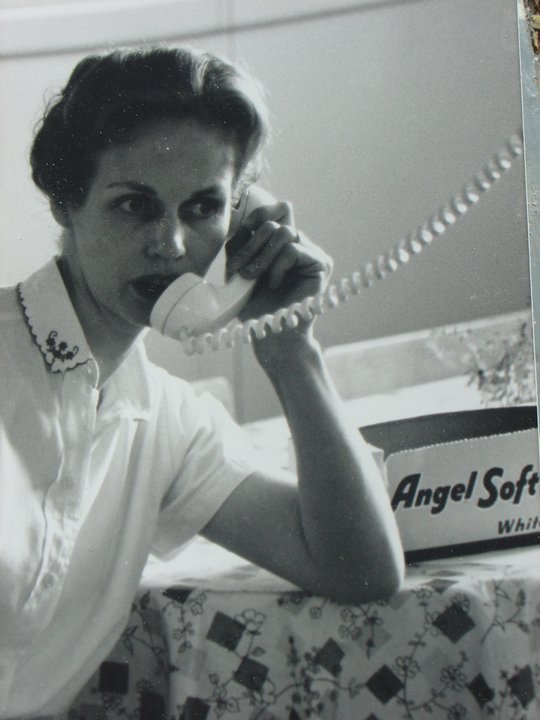 I squinched my nose at him, confused. And we moved on.

“Um, I’ve got seed packets that I’d like to attach to the cards. Forget-me-nots were her favourite flower.” Plus I was pretty sure everyone who saw them would cry which totally worked for me. “Do you want me to staple them to the cards?”

“OH, I THINK WE CAN TAKE CARE OF THAT! HANG ON!” Reaching out with his foot, he kicked the office door open and shouted down the hall for an assistant.

A few more details ironed out – the photos to be put on display, the silk scarf from Paris to be draped over her coffin, the small bear to be tucked inside. All were met with loud enthusiasm by Bob.

We left, ears ringing, after being assured that Bob would take care of everything and we should get some sleep. “SEE YOU TOMORROW!!” he waved us good-bye.

The rest of the day was spent cleaning out Mum’s room at the nursing home, trying to remember to eat and talking to out of town relatives on the phone.

The next day, we got to the funeral home for the visitation and I felt a little nervous. Bob saw us and came bounding over to give me a hug. “HEY KIDDO! HOW YOU HOLDING UP???” he asked. And I melted a little. I love being called kiddo.

There weren’t quite as many bizarre moments as there had been at my Dad’s funeral. I didn’t start any arguments with anyone.

Although there was a moment.

A man I didn’t recognize walked into the room, spread his arms wide and announced, “I was madly in love with Helen McMahon!” A moment of stunned silence and then I hurried over, shook his hand and said, “I’m her daughter. Tell me more!”

He was an old family friend. She used to babysit him. She was his first crush. He was devastated when he found out she was engaged, but still too young to make his move, so he resigned himself to worshipping her from afar and they stayed friends.

The days went on. I signed paperwork at every turn. And was once again called on to make final arrangements with the priest (Why does my family keep doing that to me? I’m really bad at it!). The Paris scarf had to come off at the church. The coffin can only be draped with a white cloth to symbolize the baptismal garment, the priest explained, with a you should know this look on his face.

But I managed to get both “We’ll Meet Again” as an instrumental and “The Skater’s Waltz” as the final piece of music. Bit of a coup, that. You’re really only supposed to play hymns at a Catholic funeral. But I think I may have scared him a little. Or maybe it was the promise to never darken his door if he just let me have those songs…

The morning of the funeral, I saw Bob in the church. “GOOD MORNING KIDDO! SAD DAY! HOW YOU HOLDING UP??” He bellowed as he enveloped me in a hug.

“WELL, WE’VE GOT HER ALL SET!” He indicated the coffin. “AND WE LEFT THE LITTLE BEAR IN THERE TO KEEP HER COMPANY.”

“NO PROBLEM! WE’LL TAKE HIM OUT WHEN WE GET HER BACK TO THE FUNERAL HOME! YOU LEAVE IT WITH ME!!”

A couple of days later, I replayed this conversation in my head, mortified that I was perfectly OK with the thought of Mum being cremated, but for goodness sake, we had to save the bear!

The funeral was lovely, or at least the bits that I can remember were. I cried even harder at her’s than I did at Dad’s – the music being even more personal and conducive to weeping.

And the day after the funeral my brother John and I met with the staff of the funeral home for what they called After Care, which sounds like a medical procedure and therefore scared me. It was actually just a meeting where we made sure everything that needed to be done was done and everyone who needed to be notified of Mum’s death was notified.

We were all seated when Bob came in. It was a busy morning for him. “WASN’T SURE WE’D HAVE TIME TODAY, BUT WE DID HER THIS MORNING!” he said proudly.

And after everything Mum and I had been through, after witnessing what MS did to her and then her struggles with the cancer that killed her. After those final days at her bedside and being with her as she took her last breaths, that was the one image I was not prepared to handle.