My Mother Was a Nurse 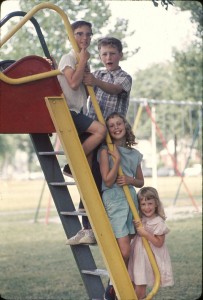 My parents were pretty low-key types. Birthdays meant some gifts and a cake with the immediate family. Anniversaries meant cards. Maybe some flowers. So I’m not really sure what possessed them to take us all to a park for a picnic dinner to celebrate their 24th anniversary, but after all the mayhem and bloodshed that ensued, I’m surprised they ever again mentioned to anyone that they were even married.

There were swings and slides at the park. And we were sent to play on them. Which I thought was, like, the best thing ever because we didn’t have a swingset at home and holy cow! Swings!!

My brother Kevin was a bit of a daredevil back then. His favourite party trick was to fall down the stairs while issuing blood-curdling screams, arms and legs flying, looking as though he’d broken every bone in his body and then stand up and take a bow. He also liked to go down slides standing up, usually without incident.

This particular sunny late-August evening, though, his sneaker grabbed on the slide and he landed on his face, knocking out his front tooth. My sister Chris, always the level-headed one, stooped to pick it out of the sand and then helped Kevin back to the picnic tables where my parents were, presumably enjoying a quiet moment of reminiscence. They looked up to see two of the four of their children with them that evening covered with blood, Kevin green and glassy-eyed, both of them staggering a little.

They leapt to their feet. Helping Kevin to lie down on one of the benches, my sister was heard to murmur ‘I don’t feel so good,’ before needing to be helped to a bench of her own. At which point, my mother, realizing that while hurt, neither had suffered a mortal wound, needed a little lie down herself.

The next half-hour or so were spent by my Dad moving from one casualty to the next draping cold cloths on foreheads and commanding everyone to just stay where you are after a few of them tried to get up with bad results. It was all a bit confusing to watch. Dad would wring out a cloth in the icewater at the bottom of the cooler, place a firm hand on someone’s shoulder and get them back to horizontal before moving on to the next person. They kept sitting up, cloths on foreheads, Kevin bloodied, before lying back down suddenly. It was like a horror movie with really bad production values.

Not having seen the accident, my brother John and I stood off to one side, mystified as to what the hell was actually happening and he keeping me from running back to the swings because, dude! Swings!

Eventually, wooziness receded enough that Dad was able to marshall us all into the car and get us home before taking Kevin off for emergency dental work and I was able to settle in for an all-night snit. I was eight years old and I really liked swings.

This was not the only time my mother reacted badly to the sight of her children bleeding.

One Christmas, years before, I had been chasing my cousin up the stairs and he turned around and gave me a push. I fell down and was borne to the kitchen by my aunties where I screamed loudly and had an epic nosebleed. And in that weird dislocated state that you go to when you’ve been hurt and had all the wind knocked out of you, and you’ve ruined your favourite red velvet dress, I heard my mother cry, “Patty used to bleed like this!!” and the aunties tried to calm her down and I tried desperately to keep all my blood inside of me because even at four I knew that those kinds of reminders of my dead sister were not something I wanted to be responsible for. And even though nosebleeds were a regular part of my existence until my late teens, Chris said she would look after me if I needed help. It was just too hard on Mum.

But we thought other forms of bleeding and medical requirements would be OK. Mum was a nurse, after all, and really quite good at helping out when any of the neighbours needed dressings changed or injections given.

One day, Chris hit her elbow on the corner of the doorframe, bursting a blood vessel. It didn’t hurt much and she didn’t really think anything of it until later in the evening when a friend said, “What happened to your elbow??!!?!??!” and she noticed that it had swelled up like a water balloon.

When Chris got home, Mum had been asleep, but woke up to see how her night had gone. When informed of the situation with her elbow, she got up to see to it, took one look and promptly passed out on the floor. And Chris, thinking this meant it was far worse than it actually was, had to go lie down.

At breakfast the next morning, during the sheepish retelling, we asked Mum, “How did you manage when you were a nurse? Did you pass out at the sight of blood then?”

“Well, no, of course not,” she said. Patients blood had no effect on her at all. It was only when it was coming out of the people she cared about that it bothered her.

After that, we just took care of our own bandaging and clean up. It was just easier. But we still liked bragging that Mum was a nurse.

6 Responses to My Mother Was a Nurse