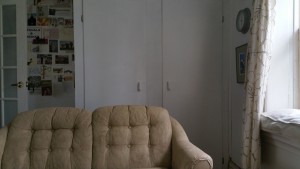 One of the challenges of living in a smaller space is getting past the notion of room designations and where stuff is ‘supposed’ to go.

In our recent round of decluttering, we decided to lighten things up in the bedroom. I realized that if we pared down our wardrobes, we could move our clothes into the only closet in the apartment and get rid of three (3!!!!) pieces of furniture from our bedroom.

The only cause for concern was that the closet is in the living room, ALL the way down the hall from the bedroom.  “It seems like a long way to go to get dressed,” Alan said. And in a way, he’s right. But spend five minutes on Pinterest, and you’ll see pictures of walk-in closets bigger than our entire apartment. So we agreed to just give it a try and see if we could live with it.

Turns out we can totally live with it, especially now that the bedroom is so much more spacious and airy.

What was stopping us was a little thing I call psychological distance. And if you’re not aware of it, it can really mess up your thinking and limit your possibilities.

Because the 1000 sq ft closet is all contained within the same room and the trek from bedroom to clothes closet was from one room to the other, the big closet is seen as an extravagant luxury (until it comes time to clean it) and our set-up can be seen as onerous and whine-worthy (until you actually live with it for a day).

This effect doesn’t just apply to setting up your home.

A few years ago, Alan and I owned a bakery the next town over from where we now live. It was in a really cool building and not really that far away. In fact, it takes longer to drive from one end of Stratford to the other than it does to drive from the edge of Stratford to our old bakery. But most people weren’t willing to make that trek, even if they drove across Stratford multiple times a day. Why? Psychological distance. It just seemed further to go.

Eventually, we gave up, sold the really cool building and moved back into town. The current incarnation of our bakery is thriving.

My mother had a neighbour that she was really friendly with. They chatted every day. Then Mum moved into a nursing home a 40 minute drive away, in another small town. And this woman, whose daily commute was longer than that each way, never went to see my Mum.

But knowledge is power and once you’re aware of the effect, it never has to get you again. You can ask yourself if it really is further from A to B than from B to A or if it just feels that way. You can measure. You can happily live with one closet and use the money you saved not having to build a closet in your bedroom for something more important like going out to dinner or adding to your retirement fund.

You can go visit your lovely neighbour in the nursing home.

I recommend questioning every distance estimate you make, because, honestly, it’s so subjective you’ll surprise yourself.

Alan and I try to minimize our driving whenever we can. I read somewhere that a great way to do this is to get a map of your city, locate your house on it and draw a circle around it of the distance you can walk comfortably walk. Anything that falls within this circle will be walked to as you do your errands, go visiting, go to work, etc. Every so often, you make the circle bigger as your fitness level increases.

I thought this was a great idea, even though I never actually got around to doing it.

And one day, a friend was over and we had an errand to run that I thought was too far to walk to. But it was a sunny day and Alan thought the distance was more reasonable than I did. So I finally pulled out the map. Aaaaaaaand discovered that this errand that was “clear on the other side of town, dude!” was, in fact, closer than the library that I walked to several times a week while carrying heavy books.