Baguette is my Safe Word 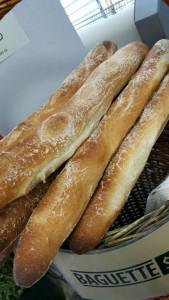 I’m a huge fan of Dan Savage. He writes about sex and relationships and can really explain a lot to the middle-aged and squeamish (although, be warned, he explains everything. So if you’re not up for that, you might want to steer clear).

And I thought, hmmmm….. can we take this out into more mainstream applications?

Because, aren’t there times when you just want to be able to call a halt to what’s going on in your life without having to explain it to anyone? I can’t be the only one here.

I tried it one day and Alan said that safe words don’t count in cleaning, but we’re going to sit down and have a little discussion about that particular rule, cuz it should totally count in cleaning.

We would probably have to place a limit on the number of times you can get out of the cleaning, otherwise it’s just not fair. And if you both deploy your safe word every time there’s cleaning to be done, things are just going to get really messy. Playing the game of ‘Let’s See How Long We Can Go Without Doing the Dishes’ stops being fun after about day three. Earlier in summertime.

One of the things I’ve noticed about being a grown-up is that, at a certain point, in fact, at repeated points throughout the day, you have to just get up and clean things. Remember when you thought that being grown-up meant being able to stay up all night while running with scissors? Ha! Psyche!

But with the added safety rules as to frequency of deployment, I totally think this could work.

And not just for the cleaning either!

What about when you’re having a discussion about something and now is just not the time and everything in you rises up to rebel and you really can’t explain why, you just know that if you have to continue this business-planning session bad things are going to happen?

And then maybe set a date for the meeting to happen cuz planning is kind of important when you’re running a business.

Difficult talk about feelings? Baguette, please. But tomorrow after dinner, for sure.

This may sound juvenile, but there are times when we don’t want to do something and can’t even explain to ourselves why that is, let alone to the people we love. If we allow each other to just take a pass once in awhile, I think it takes a lot of the pressure off the whole grown-up responsibility cleaning thing.

My brother and his wife had a similar system when their kids were in school (though they didn’t, obviously, employ a safe word, because how do you explain that to a six year old?). The kids were allowed to have one day a month that they didn’t go to school, no questions asked. They just needed a break and they took it.

One of the things I didn’t expect about being a grown-up was that it doesn’t always make sense.  We don’t stop being irrational once we learn to drive. I expected that to happen, somehow. I expected to understand my moods and motivations and for everyone around me to understand and be able to explain theirs as well. Bit of a let-down, that. But once I realized that the mystery never ends, I started looking for better ways to live with it.

Alan is one of the most even-keeled people I’ve ever met. Patience like you wouldn’t believe. “Does he ever get angry?” people ask me. Not really, no. But every once in a long while, he gets a little grumpy. And not because of anything I’ve done, which would be totally understandable and I would apologize for. But these rare moments of grumpiness do occasionally come along and I think he’s entitled to them. He allows me my moods, so now, if he’s a bit on edge, I’ll rule out the possibility that it’s something I’ve done or something I should fix and then I’ll ask, sympathetically, “Got your period?” And he’ll nod and shrug and we move on with our day, neither one of us needing to fix or explain the irrational.

So, who’s with me on this? What’s your safe word?

1 Response to Baguette is my Safe Word