What Knitting Teaches Me 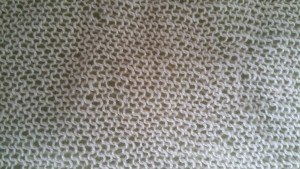 My enthusiasm for knitting has come and gone over the years.

On the one hand, when I’m feeling stressed, picking up the needles and knitting a few rows can be really relaxing. To the point where I can actually start to crave it, the way a smoker looks forward to her next cigarette.

On the other hand, it takes up space. When people know you knit, they tend to hand over their supplies of yarn and if you’re not vigilant, it can really pile up.

It wasn’t until recently that I realized that there’s an actual life lesson hidden in the process of knitting.

You make clothing or household goods when you knit: sweaters, blankets, tea cozies. But instead of starting with whole pieces of those end products, like a sleeve or a collar, you have to go back a step and make those pieces, one stitch at a time.

Looked at one way, it’s kind of a stupid way to get a sweater. Endless, boring, offering a million different ways to get off-track and give up.

But if you tilt your head in the other direction, you can see that it’s actually the way that some of the best things in life come to us.

You start out, cast on a bunch of stitches, take a deep breath and begin. Make one stitch, then another, then another. After awhile, you’ve completed a row. Then you turn your work around, give your shoulders a shake and make another stitch.

You repeat this process for however long it takes to get a front or a back or a scarf. Then you sew the pieces together and, with any luck, you end up with a wearable garment. Or you don’t. And most knitters I know freely admit that the end result isn’t that big a deal. We just like making stitch after stitch after stitch. I frequently finish all the pieces and then let them lie around for quite awhile before I sew them together. I’m too busy making another set of stitches.

And it’s this incremental quality that is such a good lesson for me. Because I’ve always been a let’s-get-to-the-finish-line kind of person.

A few years ago, I started to worry about our eventual retirement. I mean, it’s probably never going to happen. Alan plans to bake until he’s well into his eighties (there are precedents) and as a Reiki practitioner, I can keep going for the rest of my life. But even with those thoughts, some kind of nest egg is a good idea, if only to help me sleep better at night. So, just to start, I decided to collect all the coins, from quarters on down, that we’re given selling bread. Throw them in a jar, roll them up and every couple of weeks, take them down to the bank. One stitch at a time.

As I say, retirement is nowhere near imminent, but that little nest egg is growing, without my even really noticing. It makes me wish I’d started the practice in my twenties.

Writing is another stitch by stitch activity. You start with one letter. Add another. After awhile you have a word.  Another batch of letters, another word. Make a sentence. Add another letter and so on. Eventually you have a blog post and after a few years, a body of work. One stitch at a time.

There’s a whole lot of talk out there about finding your purpose and making sure your life is worthwhile and all of that. Which makes it sound like you can do it in big chunks. But you can’t. Life is lived one breath, one moment at a time.

It’s only after a whole lot of moments that you can look back and see any kind of pattern, any bigger pieces.

One stitch at a time.

2 Responses to What Knitting Teaches Me