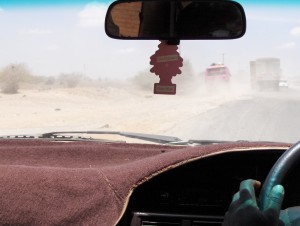 Six years ago, I was working for a charity that provided anti-retroviral drugs to children in sub-Saharan Africa who were HIV positive. I was their director of communications. A few weeks after starting, I went on a five-week tour of Kenya and Uganda, to meet the children and their caregivers. It was an amazing, life-changing trip.

We spent our first week in Nairobi, a big city with bad traffic and internet access. After that, we moved down into the Rift Valley – home to the human race and just so heart-stirringly beautiful, I long to go back. When we arrived at the hospital that was to be our base for the next ten days, the director informed us that the internet was out in the Rift Valley. Which is a bit like saying the internet is out on the Eastern Seaboard. It had been down for a week or so and no one could say when it would be fixed.

I was OK with this. I had warned my husband that communication might be a bit sporadic, so I knew he wouldn’t worry.

The only problem was that we needed to send out an important email.

So early one morning, we hired a driver and my boss and I went back to Nairobi to see if we could borrow some internet time.

Aden was 18. Originally from Sudan and eager to learn about the world.

“Where are you from?” he asked.

There was a moment’s pause. “Is that in Australia?”

I guess we’re not quite as well-known on the world stage as we’d like to think.

As the day wore on our quest for internet became monumental.  We stopped in a small town that Aden assured us had an internet cafe. And there it was! We were excited, thinking that we could get our work done and have the afternoon free.

We got back to the hospital we’d been working in the week before around lunch time. Aden parked his car in the shade and promised to wait for us. We headed to the library, which was in darkness.

“The electricity is out,” said the girl behind the desk. “You cannot use the computers.” We had laptops. That ran on batteries. Not fully understanding that without a modem we wouldn’t get anywhere, we set up and asked for the password. “I don’t know what it is,” said the girl.

“Can you get someone?”

But no, apparently, everything just signed in automatically and the password, having fulfilled its function was now lost for good.

We took a deep breath.

“OK,” said my boss. “Here’s what you do. Go back to the gates, find Aden and get him to take you to the Karen Guest House.” We had stayed there when we were in Nairobi. They had internet access. Lots and lots and lots of it.

Expressing some concern that I didn’t know where it was, my boss assured me that as a driver, Aden would be able to find it without any trouble at all.

Heading out the gates of the hospital, I found the car, with Aden’s feet resting comfortably on the dash. He was asleep.

He woke up cheerfully enough and was quite happy to take on the challenge of driving through an unfamiliar city to find a hotel to which the only directions I had was the name of the main street it was near.

As we passed a sign, Aden asked, “Is this it?” and I realized that he couldn’t read.  So we made our way through town, Aden contending with the traffic and me trying to find the name of the street we were looking for, in English, when most of the signage, understandably, was in Swahili.

A previous driver had explained to me that, in Nairobi “We do not drive on the left or the right. We drive on the smooth.” This was said as cars coming toward us flashed by on either side and I gripped my seat, trying to smile pleasantly. In the days we’d been away, conditions had not noticeably improved.

“Do you know any Swahili?” asked Aden.

I’d learned ‘Jambo’ (hello) and a few others. He taught me a couple of new words and then asked for a few English words. We were enjoying ourselves as the day ticked away.

Eventually, we found the street we were looking for and then the turn-off to the hotel. It was blocked as a work crew chopped at it with pickaxes.

“Well, that’s it,” I said to Aden. “Clearly we are not meant to send our email today.”

“I will get you there,” he said. And called to one of the workers. They had a long conversation in Swahili. Aden reversed the car and went looking for the back road into the hotel.

And it was around then, as I looked at the expanse of land around me, with not another soul in sight, riding in a broken-down car with an eighteen year old boy I had only met that morning, under the blasting sun, feeling a little dizzy from the heat, that I thought to wonder if I was in any danger.

But there was the hotel. Aden pulled up into another patch of shade and propped up his feet as I went in to buy some internet time.

As I was paying up after sending out the vital email (and one to Alan, too) I bought some bottled water.

Hopping into the car, I handed a bottle of cold water to Aden and opened my own. He gave me a great big smile and we headed back to the hospital to pick up my boss.