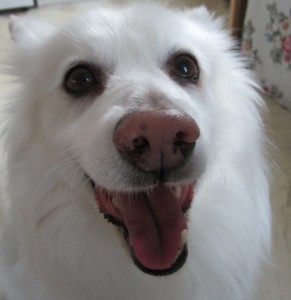 I’ve had a few comments from people over the last few years, about how much I do, how much I’ve accomplished. It always strikes me as really funny because, growing up, I was the lazy one in the family.

But I guess I do manage to do some things. And people always want to know how other people manage to do the things they do. What is the secret?

Yep. That’s pretty much it. I learned it from my husband, over the course of many 3:00 AM freak-out sessions as I was fretting over how to get things done (so many things!) and he was rolling over to resume peaceful snoring. “Don’t worry,” he’ll mumble, “Stuff gets done. Stuff always gets done.”

And when I ask him, in full clipboard and whistle mode why certain things have not been done yet??? We have deadlines, dammit, we have dreams. He looks at me calmly and says again “It’ll get done.”

And, wouldn’t you know it, he’s right.

Stuff gets done. Or it doesn’t. Deadlines are met. Or passed. Or reset.

I’ve spent way too many sleepless nights worrying about missing the deadline for paying our taxes/wondering if my passport would arrive in time/scared that the cheque wouldn’t clear. We once missed a closing date on a real estate deal. On a holiday weekend. It went through on the following Tuesday and then I caught up on a weekend’s worth of missed sleep. We lived for a couple of months in a place without a mortgage. I spent many nights worrying that we’d be evicted. We weren’t. Alan said even the bank didn’t want the place. He was right.

So you see, I’ve come up with this system through years of real-life tests. Honest beta-testing. If I could package and sell it, I’d be rich. I’ve worried, I’ve fretted, I’ve learned. And we’re fine. We have a life. One that’s about more than To Do lists and meeting our goals and bettering ourselves and surpassing our projections.

Some of those things have happened. We also have long, lazy, wine-soaked lunches and naps in the afternoon, because it’s our day off and we’re sleepy. We snuggle in the morning. We go out for spontaneous dinners with friends. We play with the dog (I mean, seriously. Who can say no to that face?).

And stuff gets done.

How it usually works for me (I assume Alan has his own system) is that when a whole bunch of ideas start to pile up in my head, I make a list, or a bunch of lists, of things I’d like to happen in the next little while. I leave the list somewhere I can find it easily but not so obvious that it nags me. Then I go about living my life, with the wine and the snuggles and the dinners with friends.

Once a week or so, I have a little look at the list. Cross off the things that got done. Amend some ideas. Decide to do one or two of the things in the next little while. And then I go back to the playing with the dog and snuggles with Alan.

And after awhile, I may just get so tired of moving one of the things from list to list to list that I just, seemingly by magic, do it, just so I don’t have to keep writing it down.  If it’s important enough. Because sometimes, the goals I had last month don’t seem as important this month. And sometimes things that I hadn’t even thought might happen have happened and my whole life needs a rethink.

And sometimes I just lose the list. And then I’ll go for quite a long time with no plan at all.

How has it worked for me?  Well, let’s see. Alan and I have owned several cool businesses and we’ve learned a lot from each and every one of them. We’ve travelled. Moved around. Met some of the best people on earth. I’ve been published here and there. I’ve made friends through this blog.

I didn’t graduate from university. I haven’t pursued any goals with single-minded energy. My focus changes on a daily basis. I have no idea where I’ll be in five years. My life might even look completely different a year from now. It suits me.

If the other ways of getting stuff done are grating on your soul. You might want to give it a try.