Why Vivian Maxwell Will Never Get Ahead 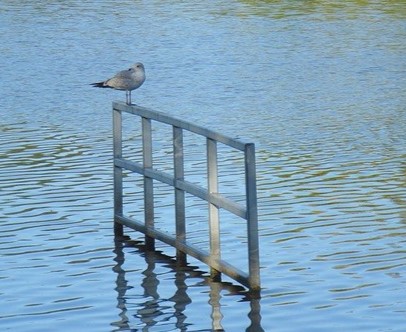 I live in an apartment tower right near the river.  I can walk along and watch the ships and the birds.  Seagulls, mostly, of course, but smaller birds, too.  There were a bunch of them out there now, just sort of whirling around in the early morning breezes.  I wished I could join them.

I’ve always loved water and beaches and stuff.  The wide-open views and the air.  Maybe one day I’ll have a cottage.  My parents have one.  Dad inherited it from Gran. She couldn’t afford the upkeep after Grandpa died. I guess I’ll get it when they’re gone.  But that could be a really long time from now.  And who knows, they might decide to leave it to someone else.  My cousin Toby is their godson, and like the son they never had.  Following in my Dad’s footsteps way more than I ever will.  Just doing that whole corporate move up the ladder of success thing that I just hate.  It’s done well for my Dad and all.  I mean, he’s Vice President in Charge of Something at one of the big auto-makers here in town.  Wears a suit all the time.  He and Mum are always going out to business functions and crap.

I’m glad he’s happy.  But he can’t see that it’s not the life for me.  And he keeps trying to make me try it.  He signed me up for a course awhile back.  One of those “Conquer the World in Ten Easy Lessons” things, where they think you’re going to learn anything useful by standing at the front of the room shouting slogans.  First night out, the instructor, this really polished, enthusiastic guy gets up and starts going on and on and on about lions and how great and mighty and strong they are and wouldn’t the world be just peachy if every living thing could just release the lion that’s prowling around inside of them RIGHT NOW!

I told him that the world would come to a major crashing halt the day after tomorrow if that ever happened.  I mean, think about it – what do lions eat?  The instructor said raw meat, but it’s better than that.  They eat the bloated carcasses of old diseased worn-down gazelles.  People always go on and on about how the lions keep the gazelle herds strong, weeding out the weak and the unfit.  But that’s a major load of crap.  If it weren’t for the weak and supposedly unfit gazelles, the lions wouldn’t be able to catch anything and they’d starve to death.  They need those poor damaged gazelles.  Like they’d ever admit it.  I don’t know why anyone would want everybody to release the lion within them, when it’s the weak, the worn out and the basically stupid who have kept the world ticking along for as long as it has.  I mean, the people who have wreaked the greatest havoc on the world have been the strong, lusty go out and get ‘em types.  Look at the Spanish Inquisition and you see a bunch of guys with only one thing on their minds: Career Advancement.  Sucking up to the Big Boss.  The explorers and all the crap they brought to the places they “found”?  Lions one and all.  Adolf Hitler?  There was nothing laid-back about him.  He had a dream and he went for it.  And look at the mess he made.  The guys who brought us the atom bomb?  Over-achievers, one and all.  I mean, Joe Schlepp may never reach his full potential, but at least he won’t bring about the end of life as we know it.

So then in the next class, he decides to work on the other end of the food chain and goes on and on about the amoeba and how it never gets anywhere.  Well I couldn’t let that one slide past, either.  I mean, amoeba life has to be just about perfect.  They know what their life is about and they just get on with it.  Living and reproducing and living some more. And they do it all in one tiny cell.  It’s perfect. What do they need with achievement?  What’s wrong with being content?  I can’t stand these business types who feel like they have to leave their mark on the world or their lives haven’t been worth anything. And it’s usually a pretty filthy footprint they leave, too.

After the third class, I was asked not to come back.  I guess I was the first person ever to be kicked out of the course.  My Dad couldn’t even get his money back.  I think he’s given up on me, for the time being at least, and I’ve been a happy little amoeba ever since.

4 Responses to Why Vivian Maxwell Will Never Get Ahead