The Usefulness of Broken Things 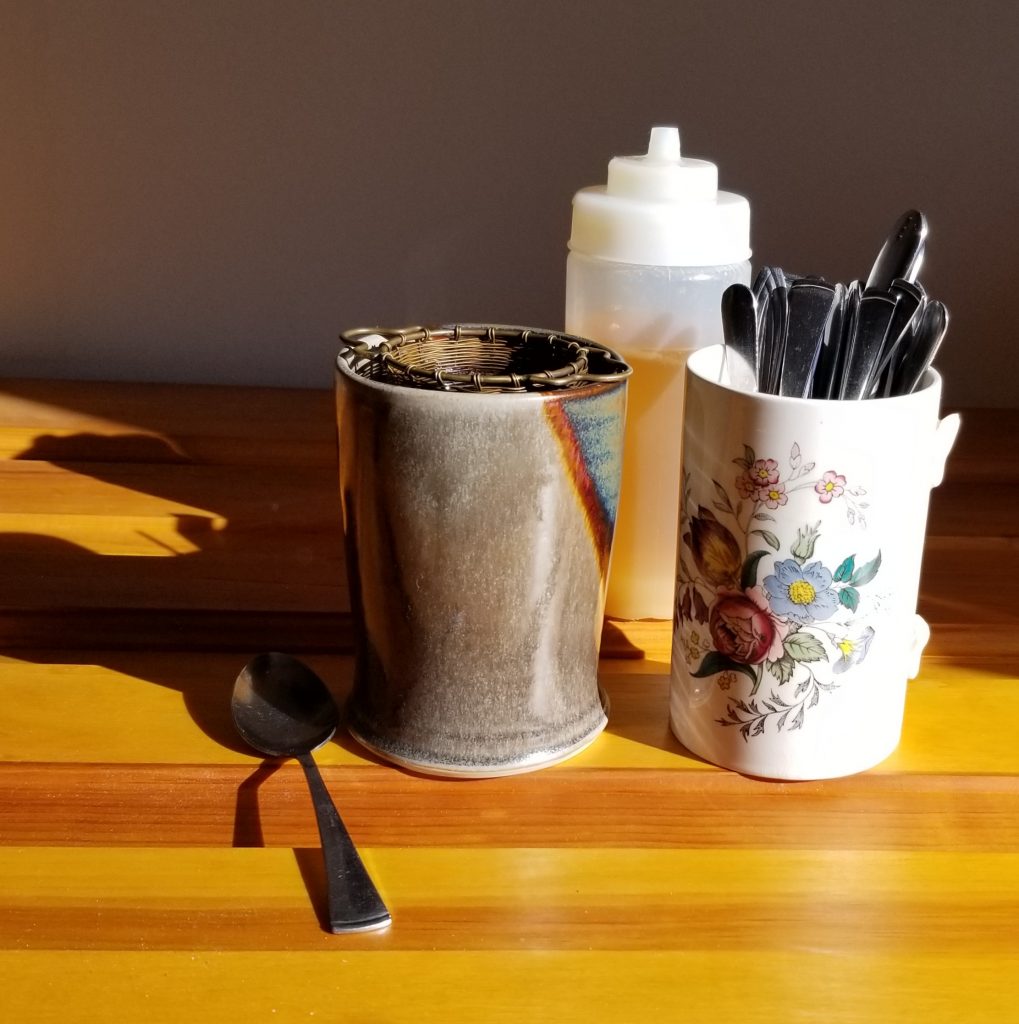 Mending and repairing our worn and broken things is a really good practice. The holey sock becomes whole again and you get a few more miles out of it instead of buying new. A bit of wire round the handle of a basket strengthens it for further use. It’s a big step in the right direction, the direction away from replacing the worn with the brand new.

Sometimes, you don’t need to replace or even repair something when it breaks. You can substitute something you already have that does the same job as I did when my electric kettle irreparably broke.

We also have a box grater that we’ve had forever. It came with a plastic handle that eventually discoloured and then cracked and then finally broke off completely and, of course, my first thought, because I’m a well-trained consumer, was to throw it out and put a new one on my shopping list. Maybe a sturdier, better one with a wooden or metal handle because I was on a journey to becoming a better, more sustainable consumer.

But I still had a bunch of carrots that needed grating right now and all the shops were closed. So I grated them on my broken grater and realized that the handle, ugly though it was, had been more decorative than functional and the grater worked just as well without it. So I didn’t replace it and I’ve been using it happily without its handle for several years now. And every time I do, I’m reminded that using what you already have is really the most sustainable choice.

Another thing I chose not to replace when it broke was my hair dryer. OK, the fact that it ended its service by shooting flames at my head may have traumatized me just a little, but once I calmed down and it cooled off, I had a good look at it and realized that a hair-dryer is a hunk of plastic and metal that no one knows how to fix so every single one that’s manufactured will eventually end up in a landfill somewhere and I can no longer justify a purchase like that.

Instead, I’m learning to make friends with the weirdness that is my hair. It is completely unpredictable and does whatever the hell it wants. It, in fact, is living the life I would live if I had just a little more courage. And it’s lovely to have a reminder of the rebellious freedom I aspire to right there on the top of my head even if occasionally I don’t actually want to take it out in public.

I’ve got a haircut and a routine that I can live with and I know that a really short cut is always an option if I want a bit more predictability in my life. I’m not sending melted lumps of plastic to the landfill and our hydro bills are lower. So yay!

Many years ago, I bought a great big Spode mug for my tea. Because when I drink tea, I like to drink a lot of it. And I used it happily for quite a few years until one day the handle broke off. I asked my Dad to repair it. He was quite good at mending broken china. But he winced and shook his head. “This kind of repair is always a bit dodgy,” he said. “I’d hate for it to give way when it was full of hot tea. You could really hurt yourself.”

So I made do with other mugs. But I couldn’t quite bring myself to throw the other one out. It now houses my tea spoons which, I think must be a British habit. A bunch of spoons in a mug for stirring your tea. Other cultures keep them in a drawer with the rest of the silverware, but the Brits find it handier to keep the tea spoons in a mug close to the other tea-making things. And since tea-making happens far more frequently than meal-making, it makes sense to me to do it this way. Plus I got to keep my pretty mug. So that’s a win.

I know if I had a look through my house, I could come up with other examples of things that I didn’t repair or replace when they broke, but it’s become a habit, an accepted part of my routine, so I’d need to really think about it to remember. And it’s not like my home is full of broken things. When people come to visit, they say things like, “Your home is so lovely!” rather than, “I could fix that for you…”

I think it’s just a matter of taking a step back and a deep breath when something breaks. It’s our stuff’s way of asking, “Do you really need me?”  And if they’re socks or a warm blanket or favourite sweater, maybe we do and maybe learning to repair them would help us to slow down and value them more.

But sometimes, and in my life, it seems to be with appliances that this happens most frequently, the answer is no. I don’t actually need you and the fact that you can’t be fixed when you break means that I won’t replace you.

And sometimes we can find a wonky sort of beauty in the broken. The chipped and dented can still be useful, can add a depth to our collection of things that can’t be found in the uniformly shiny and new.

This entry was posted in Musings and tagged (home)making. Bookmark the permalink.