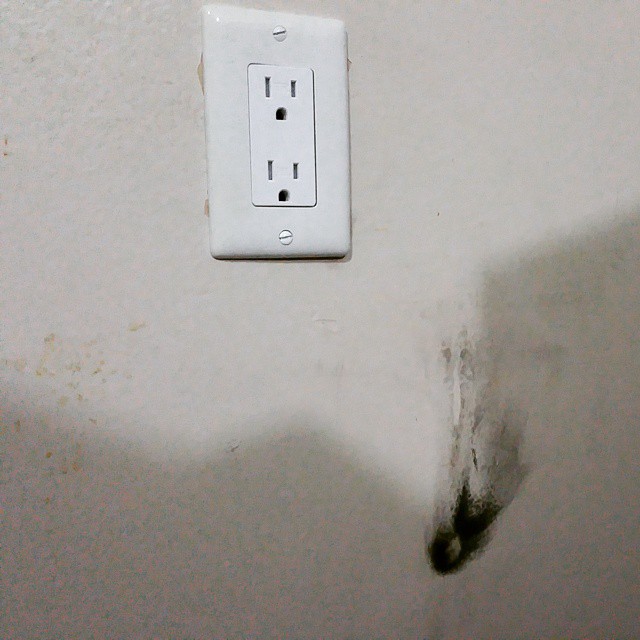 You know you’ve fixed up a lot of houses when you start to have favourites among your skilled trades.

When we needed some electrical work done in the first house we owned, Alan asked around at work and someone recommended Ted. Highly. So we asked him in to do, I can’t even remember what, but he had a look around and said, “I wouldn’t feel good doing just that. You need some major rewiring here.” And he took me down the basement and pointed out the dodgy bits and even I could see he was right.

“I know you’re just starting out and money is a factor, so you think about it and let me know.”

So Alan and I had a think and we called him back and he came and rewired our house.

Ted worked the night shift at the salt mines and had his own business during the day. I’m not sure when he slept, but he did admit to a bit of trouble with insomnia. He was six and a half feet tall, with that tired, grumpy look that insomniacs often get. But he was kind. And gentle. And absolutely ethical.

So we had no hesitation hiring him to come and rewire the next house we bought, the first B & B. It was a huge house and needed a lot of work. So Ted brought in his crew. And the plumber brought in his. And there were carpenters and plasterers. And parents and aunties, friends and siblings. It was ridiculous.

Because of his insomnia, Ted liked to get started early. He would have been there at 6:00 if I had let him but I told him that 7:00 was plenty early enough. “Well, alright, young lady,” he said. “You’re the boss.”

One day, he lurched into the kitchen as I was drilling holes in the doors of the island we’d built. He looked a little askance at the sight of me using a power tool, but when nothing broke and I was able to put the knob in, right where I had intended it to go, he asked, “So… do you like doing that sort of thing?”

And so, in a bid to keep costs down, Ted took me on as his junior apprentice. I got to help him rewire all the light fixtures in the living room and dining room, fiddly, detailed work that I quite enjoyed doing.

And then! I got to help him fish wiring through the house! “I’m claustrophobic,” he told me, “so if you can put your head between the rafters in the attic, it’d be a real help.”

“You work in the salt mines and you’re claustrophobic????” I asked.

“Yeah. I guess I didn’t think that through.”

He also had a bad back, needing twice-weekly visits to the chiropractor just to get out of bed in the morning.

All problems were situations to Ted. And an old house presented them on a daily basis.

I’d be in the kitchen, working on something when Ted would stagger in, frowning.

“We have a situation,” he’d say carefully and proceed to describe something that I would have definitely called a problem. And then we’d figure out how best to solve it and is it OK to put yet another hole in the plaster and would you like a cup of tea, Ted?

Eventually, it all got done. The holes were plastered over and painted and we discovered that we weren’t really ready to run a B & B. So we sold up and moved to a new place that needed electrical work. SO MUCH electrical work.

The house on York had been done over by what Alan refers to as a handy guy. Did it all himself with no idea what he was doing. Which is really not safe when it comes to electricals.

The situations occurred on an hourly basis. “Uh, Barb?” Ted would call. “Come see this.” And I would go look.

In the kitchen, the handy guy had wired an outlet by starting at the box. And when he ran out of wire mere inches from the outlet, he had stripped the end of that wire and another one and looped them together and left them in the wall, wire exposed, hey, presto!

One night, Alan and I were eating pizza in the living room while Ted worked away in the kitchen. He’d moved to the day shift at that point and we had to set him a curfew.

There was a blinding flash and and funny noise. And then silence.

We dropped the pizza and ran into the kitchen. Ted was, thankfully, standing, rubbing the back of his neck, looking puzzled.

“Now why would anyone have a live wire leading to nothing?” he asked.

“Well, not anymore,” he said, lumbering towards the basement. “I’m going to go disconnect it!”

I don’t know if Ted ever encountered an actual problem or if life just kept handing him situations. Our next move took us out of Windsor and Stratford was just too far a commute for a man with a bad back, even one who never slept.

But every time I have a problem, I think of Ted and correct myself. “What we have here is a situation.“

4 Responses to Ted the Electrician