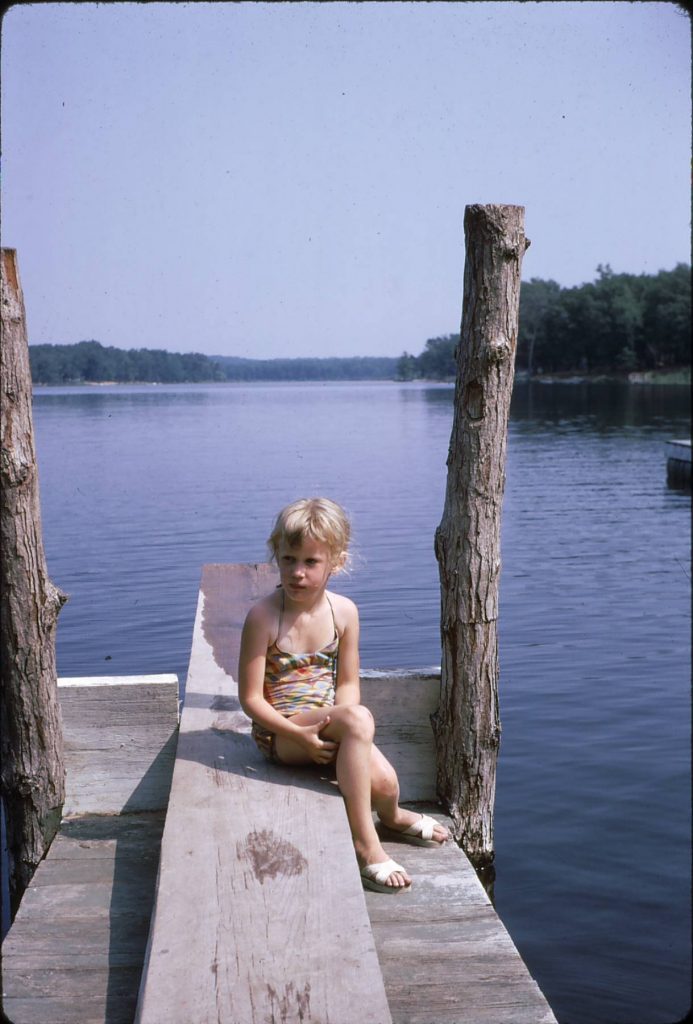 When I was a kid, family vacations involved renting a cabin so we could spend two weeks bobbing about in water. My parents, therefore, deemed it necessary for us to learn to swim.

My older siblings were signed up for lessons at Mumford High School in Detroit, with promises that when I was old enough, I would go, too.

They loved those Saturday mornings! Splashing around, learning to dive, drinking tea out of thermoses and eating snacks when Dad picked them up when the lesson was over, wrapped up in sweaters and blankets as the car windows steamed up.

At the end of the season, I got to go in and watch a demonstration which was really, really cool. But there was this folding wall across the pool, to divide the different grades, and at the end of the lesson, they could duck down and swim under, which they thought was, like the best thing ever because who ever heard of a wall in a swimming pool and aren’t you even more excited for being old enough for your lessons, Barb???

Bit that wall and the thought of swimming under it filled me with a terror so huge I sometimes still have dreams about it.

I once inadvertently found myself under the raft at the resort my parents took us to every summer and felt such a wave of panic at being trapped there, I’m sure my cries were heard across the lake. My sister tried to get me to just duck under the water so I could clear the side of the raft, but I fought her off. There was no way I was putting my head under and I fought off anyone else who tried to get me to. In fact, I couldn’t go under, strapped in as I was to a life jacket while riding an air mattress with my ankles encased in an inner tube.  This was before the invention of water wings, or I would have encased myself in them until I looked like a sort of neon Michelin man, so strong was my fear of drowning.

Eventually, it was deemed easier for my three brothers to push down on one side of the raft so the other side could lift up high enough for me to float away, after repeated promises that they weren’t going to drop it on my head. Actually, I didn’t believe a word of it and my sister grabbed me and dragged me out. I then retired to the beach to build sand castles while muttering to myself about the stupidity of rafts, deep water and families.

One day, a victim of dockside horseplay, I was thrown into the water, where I sank down into the depths, silent and murky. I watched in fascination the bubbles that escaped me and rose past my face to the surface. It was so peaceful.

When I was eventually hauled out and dumped unceremoniously onto my feet,the air sharp and bright and noisy around me, the water barely came up to my knees.

“You were in no danger!” my sister muttered. “Why do you have to make such a big deal of everything?”

What she didn’t understand, what I could not even begin to explain was that the terror I had felt on entering the water was so great, so overwhelming, that I had entirely forgotten I had legs.

I survived those vacations and eventually was old enough for swimming lessons. My parents signed me up, but we got a letter back that not enough children had registered and the class had been cancelled. I let on that I was disappointed, because they were, but secretly, I was relieved. Jubilant, even.

Soon after that, we made plans to move to Windsor and with one thing and another, swimming lessons weren’t mentioned again till I was nearly twelve and thought I had gotten away with it.

“We’re renting a cottage this summer and you need to learn to swim,” my Mother told me early one morning. “You’ll only be able to get to two weeks of classes. I hope that will be enough.”

So there I was, a gangling, near-adolescent, surrounded by six to eight-year-olds in our community pool’s Learn to Swim class. This did nothing to increase my love of the water.

The last class before we left for vacation was learning to tread water. After giving us the theory and having us practice the movements, Bruce, the Speedo-clad instructor, took us to the deep end so that we could try it in real life.

“It’s going to be over your head,” he told each child in turn as they prepared to jump in. His voice so kind and deep that my knees turned to jelly.  “Hold your breath and don’t panic. I’m right here watching.”

So conscientious. So handsome. So distracting.

When it was my turn to jump he said, dismissively, turning away to watch the other children. “Watch you don’t scrape your toes on the bottom.”

I’ve never been a strong swimmer. And I never got the hang of diving. But I can splash around and tread water. And I no longer need a life jacket when I go to the beach.