The Cabinet of Indecision 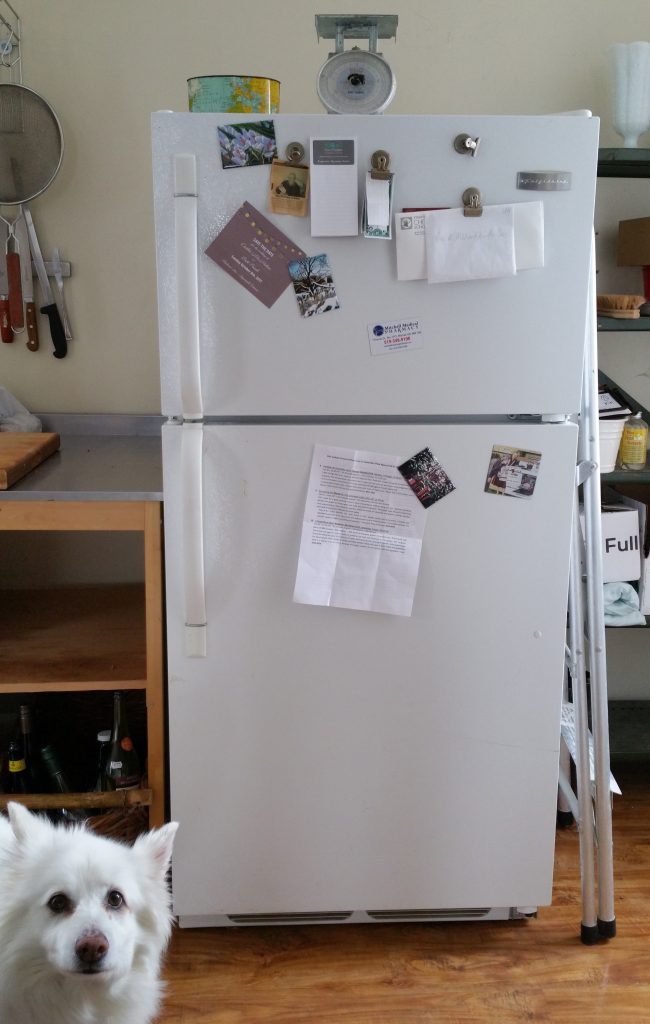 When we were setting up our kitchen, there was a space to the right of the fridge just big enough for a set of metal shelves that I had saved from my parents’ basement. They came out of a lab in the physics department of the university. My Dad had used them to store his back issues of Scientific American and, I dunno, Physics Monthly. I absolutely adore the look of old office furniture and don’t get me started on commercial kitchenware…

So we popped the shelves into the space between fridge and the window, ostensibly to hold our shoes. The back door opens straight into the kitchen. We take our shoes off at the door and then, when they’re dry, we put them on the shelves. Tidy.

But, since that space is also next to the basement stairs, the shelves tend to collect tools that need to be put back but that we’re too lazy to return in the moment.

And then, over time, we add in the things that we want to donate to the thrift store and stuff that we don’t know what else to do with because we’re just too tired or stressed or distracted to make a decision.

It’s perhaps the hardest-working piece of furniture in the house. And, especially this past year, has kept the rest of the place tidier and more serene than I could have hoped for, given that Alan’s working about 80 hours a week at the bakery and I’ve been mostly unable to keep up on the housework. We’ve been able to invite friends round for dinner because I’ve been able to swoop through the house and put things on the shelves there to be thought about later.

And I know our friends would have still come over had those things not had a hiding place, but I would have been less relaxed, less inclined to issue the invitations. I’m still insecure that way.

I started cleaning it the other day and realized that we have, actually, stumbled on to a great tool for the minimalist-minded.

Because it’s impossible to maintain pristine surroundings while actually living a life, you need a way to deal with the mess. Cleaning as you go is great. As is stopping the inflow of unnecessary stuff. But there are times when you’re just too tired to return everything to where it ought to be and forcing yourself is cruel and sleep is important. And what is necessary today may no longer be needed next month and you can’t always donate it the instant it stops being needed. You need a place for these things to rest.

It’s good if the resting spot isn’t enclosed. The front hall closet nightmare happens because you can close the door on it and the only time you remember the stuff is there is five minutes before the company shows up and you realize you will once again be throwing the coats on the bed.

If you can see it, but just out of the corner of your eye every time you walk into the kitchen, you’ll be able to tidy up when you have the time and energy but it won’t drag you down when you don’t.

I recommend against putting your Cabinet of Indecision in your bedroom. Your bedroom should be for relaxing, not stressing and feeling bad about yourself.

And limit the space that you can use for your indecisions. Open shelving is good for that. You can only stuff it so full before things start falling off. You are also more likely to deal with the stuff that needs dealing with more quickly if it’s in view. And you do want to move through it sooner rather than later. You don’t want that energy of indecision to solidify.

An entire set of shelves is more than I want to use for this purpose, now that life is running more smoothly. So as I tidy my Cabinet of Indecision, I will rein it in to a single shelf and use the other shelves for their original purposes – the storing of shoes and some kitchen equipment.

What do you think? Do you have a specific spot for the things you don’t know what to do with? Can you keep it to that spot or does it tend to take over?

(I realize that the photo up top makes it look like this post is about my fridge, but it’s a really tight corner to photograph and the dog wandered into the frame and I knew you’d understand.)

6 Responses to The Cabinet of Indecision