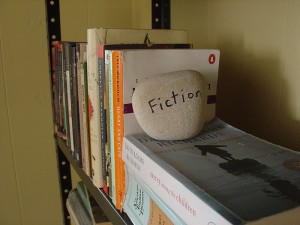 I stumbled across this post awhile ago and got really excited by the thoughts in my head. You know how that happens sometimes, when your thoughts go off on a tangent just barely connected to the ideas that sparked them?

The general idea (and I am so not doing justice to the complexity of the post) is that not everyone sees life as a narrative. Nor should they. That perfectly mentally healthy people can look at their lives and see a jumble and there is nothing wrong with that view.

I was really excited, because I’ve always been uncomfortable with the whole “life is a story and you are the story-teller” idea. Which is a bit weird, because I really like telling stories.

But the story, the narrative arc, no matter how experimental, needs to make sense. It is edited. It is formed. Things are not allowed in randomly, for no reason. Even the really cool bits that you’re thrilled with and proud of, if they don’t move the story along, have to be taken out.

Which sucks for a few reasons. It makes writing stories really hard. And it can lead you to the notion that life is supposed to make sense. That everything happens for a reason. That we all have more control of our own stories than we actually do. Because in a story, you don’t meet the man of your dreams only to have him wander off and never be seen again. Unless that happens to teach you some profound, life-affirming lesson or pave the way for a better, truer lover to turn up. If we really could write our own stories, would any of us have cancer? Or depression? Would wars and famine happen? Most of us would write out those bits if we could. And yet there they are. And if you believe in the life as story view, who do you hold responsible for the bad bits?

In stories, you don’t try a bunch of random things, spend a lot of time doubting yourself and  then die before anything begins to make any kind of sense at all. But that’s how a lot of lives play out.

In stories, you’re not allowed to drop the thread and if we believe that our lives are stories and we are the story teller, then we feel compelled to hang on to all kinds of threads that may move the action along, but that we really are no longer interested in and hey! that looks interesting…

I had a conversation with my mother, towards the end of her life and she was worried, a little, that for all the days and love and effort she had put in on this earth she really didn’t have much to show for it. Life made even less sense to her toward the end of it than it had near the beginning. She hadn’t figured it out and she hadn’t triumphed. The Great Editor in the Sky was going to demand a rewrite and she just didn’t want to…

“Did you have some good moments?” I asked.

“That’s it,” I said. “That’s life. We get moments. Some good, some awful. If we’re lucky, we get to share them with people we love. And at the end of your life, you don’t have medals or answers or anything but a bunch of moments.”

And she allowed as how she had had some moments. And many of them were good. And as long as she never had to do any of it again, that might be OK.

And please don’t think I’m wise. I was scrambling to give some comfort to a dying woman. If any of that makes any kind of sense, I hope that someone will be able to repeat it to me when my time comes.

The life as a story view puts a lot of pressure on us, doesn’t it? Pressure to make sense, to stick to a certain path. To force meaning from a random assemblage of moments and impressions and people that only really come together because they’re ours.

Maybe a better analogy would be soup – a random assemblage of ingredients that changes over time, that melds together in strange and mysterious ways. That is meant to be savoured. And shared.