Scary Fun for Parents and Kids! 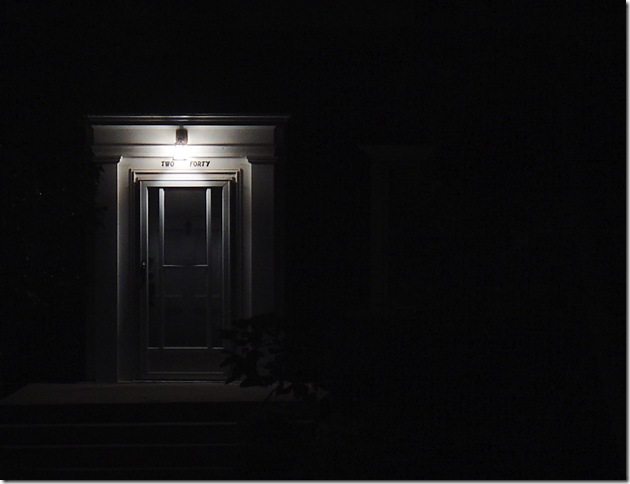 Alan and I don’t have a lot of holiday traditions. No unwieldy boxes of ornaments, no special plate to eat off of on birthdays. We haven’t had a Christmas tree in fifteen years. It’s just never been a priority for us. Possibly because taking care of all that stuff and keeping track of it doesn’t look like much fun and if the holidays can’t be fun, then they’re nothing.

But we did discover a Halloween tradition a few years back that we really like.

We were living in a small village in a big old apartment over our bakery. It was possibly one of the coolest places we’ve ever lived. But we realized that this setup would make it impossible for us to hear the trick or treaters. And if we pissed those kids off, there would be hell to pay.  So we took a couple of chairs down to our side porch, opened a bottle of wine and handed out candy from there. Now, we didn’t bring the wine out to be bad, necessarily, but to keep ourselves warm and pass the time between groups of children.

What we didn’t expect and what delighted us utterly, was the parents’ reactions. They’d be friendly and open until they noticed the bottle. Then there’d be a tone. The kids would be hurried along. “Are you drinking???” one asked. “Um, yes… would you like some?”

We had so much fun the first time that it’s become one of our only holiday traditions. Because why should the kids be the only ones who get scared silly on Halloween? We believe that our drinking on porches and scaring the parents is a small service we can offer humanity.

And it’s nice because it replaces the other, more difficult traditions of my childhood and early adult years.

My oldest sister, Patty, died on Halloween.  She had leukemia.  She was eight.

This was four years before I was born.

Being born into a family with history is a bit weird.  It’s like being born into any other family until it isn’t. You’re not really given any clues. It’s not like you’re handed a memo at birth. It takes awhile to find out the important details, which you usually do by blundering into the uncomfortable silences.

On Halloween night, we kids would put on our costumes – witches, hoboes or the ever-popular gypsy.  Grab an old pillowcase and be taken trick or treating by my Dad.  As the youngest in the family, my night would end early. I would be dropped at home while my Dad and the older kids continued their rounds until, I was certain, four in the morning.

Mum would take me upstairs to get cleaned up and ready for bed.

And, as she was wiping the make-up off my three or four or five-year old face, she would break down, sinking on to the side of the bathtub, resting her head on my chest and sobbing.

I had no idea why.

Feeling the panic and the guilt that a young child feels when a parent is in trouble, I would ask what was wrong.

Even then, I knew she wasn’t telling me the truth.

I don’t remember exactly when I found out I’d had another sister.  My parents never sat me down and gave me a talk.  The story just came out in bits and pieces, over meals and cups of coffee.  And Mum would cry sometimes.  And sometimes, so would I.

Halloween has never been entirely comfortable for me.  It was always there in the background: my mother’s tears, my parents’ sadness, my family’s loss. And looking back on it from my adult view, it amazes me that they didn’t just cancel the whole thing when my sister died. What it must have taken for them to go through it all, getting us into our costumes, buying the candy, watching us get so excited and happy and forgetful on the hardest night of the year for them.

I think we start out in life callous and slowly grow into beings of softness and understanding.

When I grew up and had a place of my own, I took to calling my parents Halloween night, just to see how they were doing.  We never really talked about it on those occasions. We are not a family that talks about things and I don’t think I’d want to belong to us if we were, but I know they knew why I was calling.

At least, I think they knew.

5 Responses to Scary Fun for Parents and Kids!