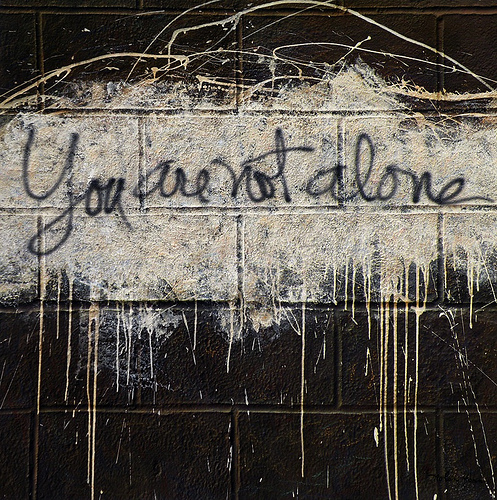 A man collapsed on the sidewalk in front of my house this week.

I didn’t see it happen, didn’t know anything was wrong until I noticed that cars had stopped and people were running.

When I looked out, there was a crowd gathered round him.  I thought, “I should call 911.”  But before I had a chance to act two of the people had their cellphones out and were talking.

My next thought was, “He’ll need a blanket.”  But as I turned to reach for mine, one appeared and was placed gently on the sidewalk for him to rest on.

I looked to see if there was anything I could do, but he was well looked after.  So, since my First Aid training included the rule that if you don’t have a specific task, the most helpful thing you can do is to just stay out of the way, I sat down on the couch to watch and wait.

He looked so vulnerable with his white hair and bald spot.

Of the small crowd of people, two were crouched on the ice-cold sidewalk behind him so that he could lean on them.  One was leaning over, her hand on his shoulder, comforting him.  The other three anxiously scanned for the ambulance.

The people who had stopped had abandoned their vehicles on a busy street, blocking traffic.

Not a single driver honked.

I breathed a little easier when I heard the sirens.

In a few minutes the Fire Rescue and the Ambulance arrived.  They put him on a stretcher and into the ambulance.  It was only when the doors of the ambulance closed that the small knot of people dispersed, returning to their cars to continue with their dinner-time routine.

There are people who will tell you that the world is a dangerous place.  That you are out there on your own.  That you can only rely on yourself.

Six total strangers proved that on the sidewalk in front of my house this week.