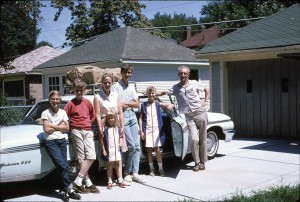 My Dad was kind of a quirky guy.

For one thing, he didn’t really like people. Us he liked, but we were family. It was people as a concept he had trouble with. Crowds, especially.

When I was little, we lived in Detroit, just across the river from Windsor, where my Mum had grown up. Her parents had had a cottage at Point Pelee, a beautiful national park at the southernmost tip of Ontario. I’m sure she had many happy memories of summers spent there. Although, come to think of it, she didn’t like water. Or sand. Or the heat, so maybe not. But summers meant people, so my Dad didn’t want to go to Point Pelee then. So once a year, he’d wake us up at four in the morning so we could bundle up, pack food and a Coleman stove into the car and head across the border to watch the sun rise.

And it was amazing. Every year, the ice formations were different.  One year there were huge sheets of it that looked like giant slides. Unfortunately, the ice was also crystal clear that year and I just couldn’t be convinced that it would hold me, despite the fact that everyone else was sliding around and not falling in.

I liked it better the year the ice had formed huge caves out of the sand on the shore. We each claimed our own house and started sniping at the neighbours.

It was always cold, of course. Most years the sky was clear enough that we could see the sun actually rise, after which we’d repair to one of the shelters where Mum would heat up the sloppy joe filling and make the tea. There is nothing like hot sloppy joes on a frozen morning, eaten huddled around a fire. And Mum’s were the best on earth. She added a can of baked beans, see and it just finished them off. My Dad, who was moderate in his appetites could down four or five at a time. When offered yet one more, he would put his hand on his chest and exclaim, “I’ll do myself an injury!”

One year it was so utterly cold that we discovered we could pour our near-boiling tea in a thin stream and by the time it reached the ground it would shatter.

Dad’s dislike of people extended to our summer vacations, as well. Though he resigned himself to the cottage experience with neighbours, he always brought a huge stack of books and spent the two weeks reading his way through them. But we had to get up at four in the morning to go and come back. And I’ve never understood why, except that he didn’t like traffic.

So we’d sneak out of the house. It was summer and all the neighbours slept with their windows open and wouldn’t really appreciate the McMahon’s waking them up as they left on holidays. Picture that scene in the Sound of Music, only with cutoffs and floppy hats. I was always the one asking if we were going to push the car all the way to Switzerland and getting shushed.

The other thing that was weird about our vacations was that we didn’t bring suitcases. We had a station wagon with a roof rack. And my father the physicist had figured out that suitcases were not the most efficient way to make use of it. So in the week before our vacation, a stack of cardboard boxes would appear in the living room and that is what we took on vacation. We each got one.

My sister’s task was to make sure I brought enough of the right clothes to get through the week.  One year I had only packed my stuffed animals. I couldn’t bear the thought of leaving any of them behind, all alone in an empty house. “We’ll leave a few together. They’ll keep each other company,” she assured me. “You have to bring underwear.”

There was only one real problem with leaving so early in the morning. We were all up for it, too excited about spending two whole weeks at the beach to actually sleep the night before anyway. And my parents both hated heavy traffic, so that was fine. But we got to the resort at 11:00 in the morning and the cottage was never ready, the people who had it before having left mid-morning like normal people.

So we’d sit there. In the car with the lake twinkling at us and the swings and slides just outside the window.

“No,” said the increasingly grumpy adults in the front seat. They knew that if they let us out of the car, they’d never round us up again and it would be down to them to do all the unpacking. They at least could smoke.

My parent’s didn’t agree on much, but, fortunately my Mum was totally with my Dad on the 4:00 AM departure. Many years later, we were talking on the phone and she related that the neighbours were away on vacation. “But Barbara,” she said, utterly baffled. “They didn’t leave till 11:30!”

12 Responses to Travels With Dad